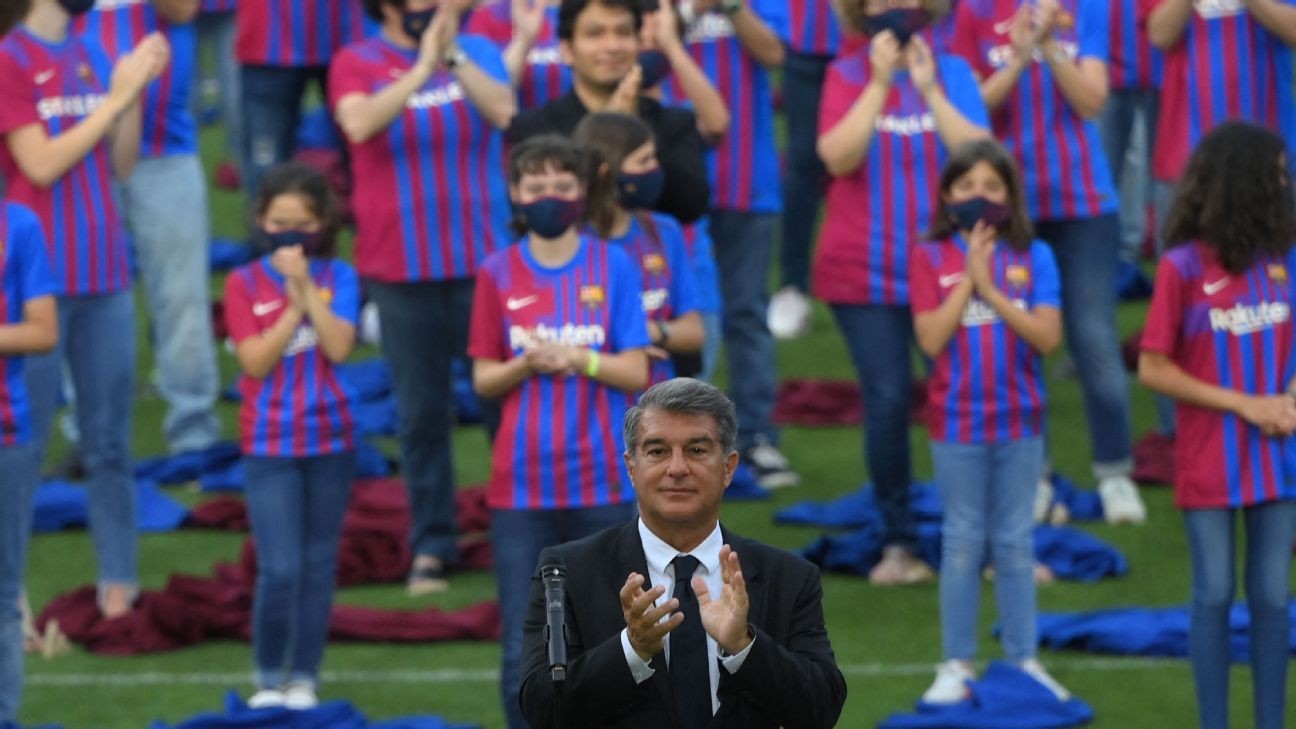 Barcelona president Joan Laporta has issued a defiant defence of the failed European Super League project and said the Catalan club will not apologise to UEFA for wanting to control their own destiny.

Barca members were due to vote on participation in the competition at the club's general assembly on Sunday but Laporta, who insists the plans are still alive, said that would not be necessary as the proposed format no longer exists.

Nine of the 12 founding clubs have dropped out of the project to break away from UEFA's Champions League, leaving just Barca, Real Madrid and Juventus fighting for change to the status quo in the European game.

"We spoke with the clubs [involved] and said we liked [the proposals], but that we needed them to accept that our members would have to approve entry at the next assembly," Laporta said as he explained the reasoning for signing up.

"It was logical to have that vote before June 30. But now, as the format doesn't exist, I won't ask you to vote. But the project is alive, I insist.

"We're still trying to enter into dialogue with UEFA. We won't apologise for trying to organise a competition. We won't say sorry to UEFA for wanting to be the owners of our own destiny. At least not while I am president."

The six English clubs involved in the Super League, in addition to Atletico Madrid, Internazionale and AC Milan, all agreed to pay fines to UEFA for trying to break away from the Champions League last month.

Sources told ESPN that European football's governing body was also planning to fine Barca, Madrid and Juve, in addition to considering the possibility of throwing them out of the Champions League for up to two years. However, UEFA have been forced to suspend disciplinary actions "until further notice" due to a court ruling currently prohibiting them from taking action.

"UEFA threatened us with fines and with kicking us out of the Champions League," Laporta continued. "Time has proven us right. Now they have cancelled [suspended] the disciplinary process and registered us for next season's Champions League.

"We're doing this because we love football and because right now the game is in a complicated situation. The state-owned clubs can make much more attractive offers than us and they keep on investing.

"Young people prefer attractive games and audiences are dropping, so there's less money. We want it to be the most attractive competition in the world. We invite UEFA and the leagues to talk about it.

"It's a much supportive project than UEFA's, too. UEFA pay €180 million in solidarity payments, but the Super League would have made that €400m. We believe FIFA are closer to our way of thinking. UEFA's reaction was strange and now they're backtracking.

"The English clubs were the competition's driving force and they got scared under pressure from UEFA. I think they regret leaving the Super League now, seeing how UEFA have backtracked on their threats."

Laporta explained that the Super League would have provided Barca with revenue of "€700m in addition to variables." The failure of the project to get off the ground forced the club to seek other forms of income to tackle debt of €1.2 billion gross.

To fill the hole, members approved an agreement with Goldman Sachs for a loan worth up to €525m on Sunday. The money will be used to restructure the club's debts and is repayable over 15 years with an interest rate of three percent.

"We're talking about the viability of the club," Laporta said before members voted on the loan. "No one should think that this money will be for signings or other projects. We have to stop the bleeding."

As first revealed by ESPN, Barca have already taken an advance on the loan to make backdated payments to players and to clear other outstanding debts.

"There was €75m pending in instalments from transfer fees, €24m to the tax office and €57m in salaries to be paid [before June 30] and we didn't have the liquid assets," vice president Eduard Romeu explained.