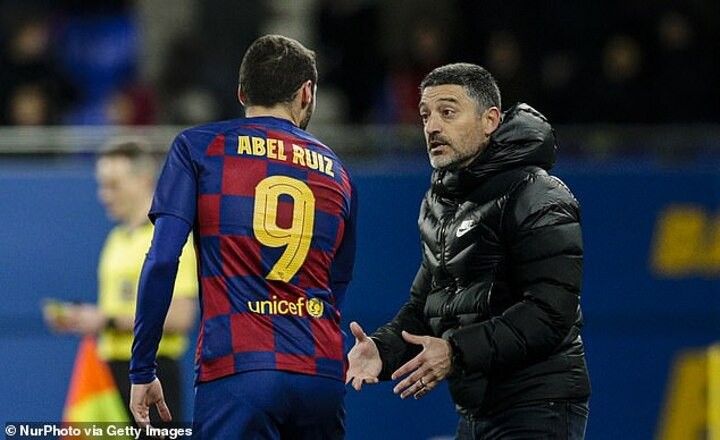 Massive change is on the way at Barcelona, and presidential candidate Lluis Fernandez claims he's identified the man who will lead the Catalans into a new era of glory.

On January 24th there will be a new president at the Nou Camp, with Josep Bartomeu not seeking another six-year term. The 57-year-old resigned after last season's shocking disintegration sparked a mass exodus in the dressing room - almost including Barca's greatest ever player, Lionel Messi.

If Fernandez, a local businessman in finance, is elected he intends to promote from within - identifying Barcelona B manager Garcia Pimienta as the club's next visionary manager.

'When Ernesto Valverde was dismissed, we should have bet on Garcia Pimienta, and now we should do the same if Ronald Koeman is removed.'

Koeman's reign has got off to a rocky start, with Barcelona struggling down in ninth, already 12 points behind league leaders Atletico Madrid. No team has ever come back to triumph from such a deficit in Spain.

Being dubbed the 'next Guardiola' could prove a tough burden for Pimienta after the Catalan's incredible success at the Nou Camp - winning 14 titles in just four seasons, including two Champions Leagues.

Like the now Manchester City boss, Pimienta has a long - though less successful - history with the Catalan club, rising through its La Masia youth ranks, into the C and B squads before finally making just one first-team appearance.

The former winger then returned to La Masia after spending the rest of his playing career below the first division and retiring in 2004, embarking on another rise through the age groups at Barcelona from under-16 level.

Winning the UEFA Youth League in 2018 bagged Pimienta the Barcelona B job for the 2018-19 season, guiding the reserve side to eighth and second-place finishes in the third tier so far.