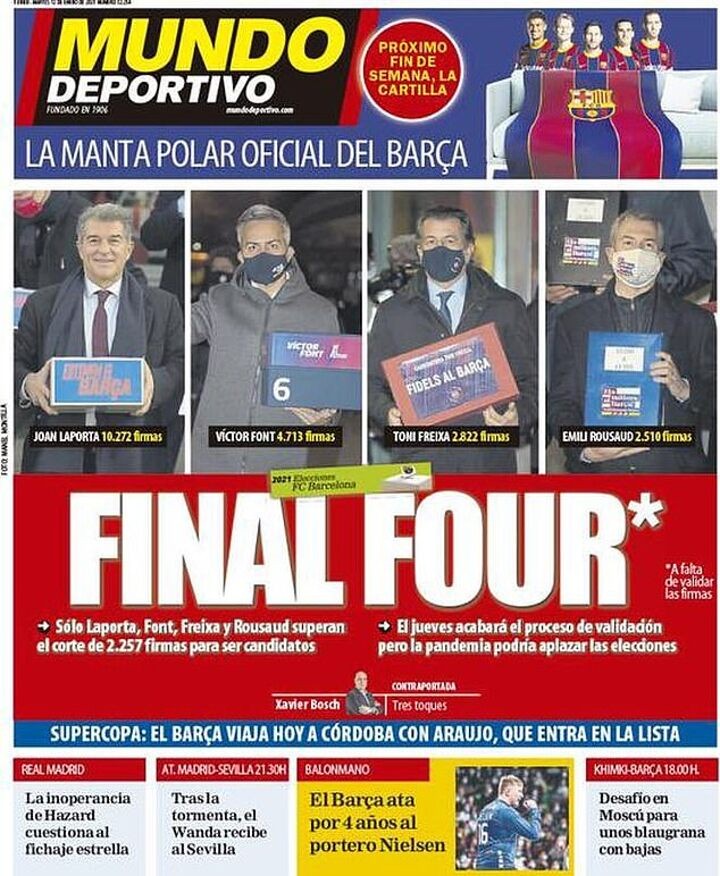 Barcelona moved a step closer to finding out who their new president will be on Monday when four candidates produced a sufficient number of signatures to earn the right to officially stand for election.

The big question now is when that election might take place, with a meeting on Friday potentially pushing back the current date of January 24 because of the ongoing coronavirus pandemic.

Here, Sportsmail looks at the logistics behind the club's biggest decision in years and weighs up the final four candidates amid a backdrop of financial chaos caused by Covid-19.

WHO IS THE FAVOURITE?

Joan Laporta was the favourite before the signatures were counted; that is now even more the case.

SO LAPORTA IS HOME AND DRY THEN?

Well, not necessarily. He only produced 5,145 signatures in the build-up to the 2003 election but he still ended up beating Luis Bassat, who had gathered 8,590 signatures - so it's no guarantee of anything.

It suggests his confidence is well placed though, and he is the favourite. He will know there is still time for things to take an unexpected turn, however.

AND THE PANDEMIC COULD PUT BACK THE ELECTION DATE?

Yes. Movement between municipalities in Catalonia is currently severely restricted because of the coronavirus, and if those restrictions are not lifted it could force the current election date of January 24 to be put back.

Restrictions were due to be lifted on January 18, but if medical experts confirm fears that this wave has still not reached its peak then the restrictions could be extended by two weeks and current lockdown rules would therefore still be in place until the start of February. That could put the election back into next month.

WOULD THAT WRECK THE NEW PRESIDENT'S CHANCE OF MAKING MOVES IN THE TRANSFER MARKET?

It would. After four wins from their last five games, moving up to third in LaLiga, and with Lionel Messi happy again, suddenly that doesn't seem to matter as much as it did about a month ago, but every candidate would prefer to take the reigns with the window still open.

RONALD KOEMAN WOULDN'T BE HAPPY WITH THAT, WOULD HE?

It's true Koeman has made no secret of wanting a new centre back (Eric Garcia from Manchester City) and a new striker (Memphis Depay from Lyon).

However, every time he has mentioned new signings he has always added that he knows things are difficult and that he would have to accept it if no reinforcements arrived.

IS THIS GOING TO DERAIL BARCELONA'S REVIVAL?

Even if the elections had taken place on January 1, there would still have been very little wriggle room in terms of the wage bill and the club would have struggled with any up-front transfer fees.

Manchester City are not going to budge from their position over Garcia, which is that if he goes mid-season there must be a fee.

And, on the brink of allowing Moussa Dembele to join Atletico Madrid, Lyon will be less inclined to let Depay leave.

A new president could try to shift players out in order to bring others in, although the unexpected progress made by young centre backs Ronald Araujo and Oscar Mingueza has lessened the immediate need for Garcia.

And with both Antoine Griezmann and Martin Braithwaite finding form of late, the need for another attacker has also slightly diminished.

DO THE CANDIDATES WANT THE ELECTIONS PUT BACK?

Laporta is adamant they should go ahead. He says the club has already gone too long without a president and with the right measures in place the election should go ahead on January 24.

To date he has made no transfer promises but he added: 'Barca would be losing a golden opportunity in the transfer market and would be further delaying an emergency economic plan. We still don't have a budget agreed for the 2020-21 season.'

Font's election promises have also not centred on players. He wants Xavi and Jordi Cruyff on board at the end of the season. This has not been an election of big-signing promises. Supporters know the situation and a candidate only loses credibility when he starts promising one.

AREN'T WE MISSING THE EXCITEMENT OF A CANDIDATE PROMISING THE WORLD?

Well, Jordi Farre talked up trying to bring back Neymar and look where that got him. He failed to make the cut on signatures and now says he will support Laporta.

It's an election very much of its time. Closer to election day candidates might start nodding and winking towards potential summer targets and Laporta mentioning the transfer deadline is an indication of that, but they will also add that they have to see the club's accounts before they can commit.

SO, WHAT ARE THE FINAL FOUR PROMISING?

Font has said he wants to make Xavi general manager, and coach if Koeman needs replacing.

Xavi has stopped short of publicly committing to that and the feeling is that if Font wins he will take up the offer. But if Laporta triumphs then Xavi could also return to the club in some capacity under his leadership – hence not publicly hammering his colours to Font's mast.

Laporta has promised to do everything to make sure Messi stays and it's likely other former names such as Victor Valdes could return to the fold.

As for outsiders Freixa and Roussaud, they could join forces but even then it seems unlikely they will prevent a two-horse race to the finish.

When that finish is likely to come, we will probably find out on Friday after a meeting between the club and Catalan Parliament.