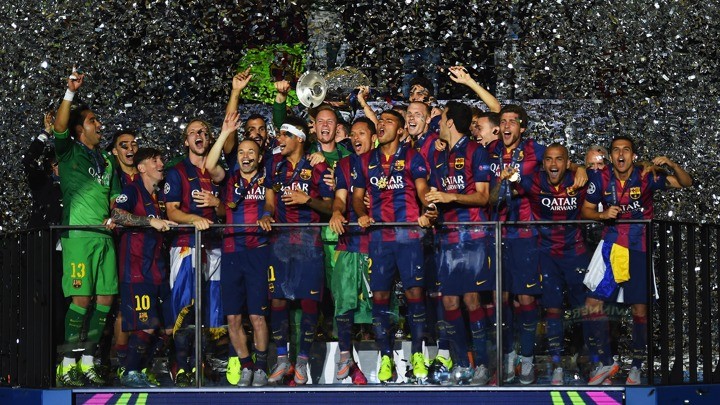 Former Barcelona defender Dani Alves has compared the club's performance in the 2015 Champions League final to Muhammad Ali after recalling their hard-fought victory against Juventus.

Luis Enrique's side clenched the second treble in their club history after downing their Serie A opposition 3-1 in Berlin.

Goals from Ivan Rakitic, Luis Suarez and Neymar wrapped up the win for Barcelona against a Juve side that had knocked out Real Madrid in the semi-finals.

Looking back on the victory, Alves felt his side channelled the world's most famous boxer as they made the most of possession and knocked out their opponent.

“We were up against very physical opponents and we knew we had to win by having the ball. It does not matter how strong your opponents is if you have them chasing after the ball so that they get tired," Alves told Barcelona's official website.

"The moment they let their guard down is the moment to attack. We were like Muhammad Ali: we floated like a butterfly and stung like a bee.

"I think we were deserving winners of the final and we celebrated a lot as we had repeated the treble.

“I remember pretty much everything about the final. It's very recent and not a lot of time has passed since then. I remember it was a very special moment but also a tough one on a personal and collective level.

"People thought we couldn't win another treble and were supporting our opponents to stop us doing it. We were aware that people thought we could not do it. When you are prepared to face that, it's unlikely negative things happen. That is Barca's secret in finals: they are always prepared."

The 2014-15 season was one to remember for Barcelona as they also claimed La Liga and the Copa del Rey - losing just six games in all competitions.

It hasn't been such smooth sailing since however with the Catalans failing to reach the Champions League final since that memorable night in Berlin.

In the years after, fierce rivals Real Madrid would win the competition for three years running before Liverpool claimed the title in 2019 after defeating Tottenham in the final.