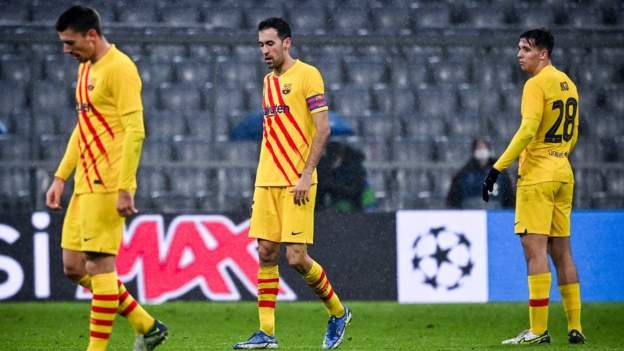 One Spanish newspaper called it Barcelona's "resignation from the football elite" as their dramatic decline culminated in a generational event - being knocked out of the Champions League before Christmas.

Barca's 3-0 defeat at Bayern Munich, who had nothing to play for having won the group already, saw them finish third, behind Benfica.

Midfielder Sergio Busquets, speaking to DAZN, said: "We feel very bad right now. We're in a tough, difficult situation. We got ourselves into this mess and it hurts a lot."

The last time they were not in the Champions League knockout stages was 2003-04, which was also their last season in the Uefa Cup/Europa League. They were eliminated by Celtic.

The last time they failed to qualify from a Champions League group was 2000, when Leeds finished above them. Barca have won the tournament four times since then.

Spanish website AS said: external-link"Barca staged their resignation from the football elite in a display of all their shortcomings when they fell without complaint against a Bayern Munich that, again in third gear and without giving the feeling of wanting to humiliate, dislodged Barca 3-0 with the attitude of a tired tiger who is lazy to hunt a baby gazelle, but does what nature expects of him."

Now they drop into the Europa League knockout round play-off. That is a game against a Europa League group runner-up for the right to play the group winners in the last 16.

Perhaps most damning, former Real Madrid midfielder Steve McManaman suggested on BT Sport demotion to the Europa League might be a good thing as winning it would mean they qualify for the Champions League next season.

They are currently seventh in La Liga, having recently replaced Ronald Koeman with club legend Xavi.

"It's a damning result and they had chances to make it worse," Barcelona defender Ronald Araujo told Movistar.

Araujo was one of four players who usually play in central defence who played the final hour in Barca's back four.

"Ultimately, we didn't not qualify because of this game but because of what we did in the other games," he continued.

What happened in the other games was two more 3-0 defeats and precisely two goals - both against rock bottom Dynamo Kyiv.

"It's true that, right now, we're not among the best teams in Europe," said Araujo.

"If we were, we'd have qualified. Our objective now is to win the Europa League. We have to go out to compete and try to win it."

Just how bad are Barcelona?Lionel Messi has scored five goals for PSG in the Champions League this season and Antoine Griezmann four for Atletico Madrid - both players left Barca in the summer

Barcelona's squad is a combination of ageing legends, players who would not have got near the great Barca teams and talented youngsters.

They famously lost their all-time top scorer Lionel Messi and several other first-team players in the summer as part of a financial crisis they are still in the middle of.

Former Chelsea midfielder Joe Cole said on BT Sport: "I wouldn't say there are three players - outside the young players - they'd want to keep hold of. They simply can't compete in the Champions League with that group of players."

This was their seventh defeat of the season in all competitions. They are 16 points behind La Liga leaders Real Madrid after 15 games.

"There's such a gap now between the best teams in Europe and Barcelona. They're in a different league now in the Europa League and I don't think too many of their supporters think they can even win that.

"They've got some serious issues looming - sponsorship deals are running out and they've got financial implications to deal with too.

"They won't talk about it but they were heavily failing two or three seasons ago; it was Messi that was keeping them afloat and in the competitions."

"Barca is still trapped in time. The nightmare began after 2-8 in Lisbon [Bayern's 2020 quarter-final win over Barca] and continues to this day after falling in Munich and being relegated to the Europa League."

Any signs of promise?Xavi has taken Barcelona over at their lowest ebb in a generation

Barcelona have excellent youngsters scattered throughout their team - but they need to add to their quality if they are to reach the elite again.

Gavi, 17, Ansu Fati and Pedri, both 19, are all senior Spain internationals. Pedri was named the best young player of 2021 in France Football's recent Ballon d'Or ceremony.

There have been some promising signs in terms of performance since they hired former captain Xavi, 41, from Qatari side Al Sadd after sacking Koeman.

Spanish football journalist Jenson said: "Even after five games it's clear to see that Xavi has got aspects of Pep Guardiola in him.

"He's got the charisma and a clear vision. But ultimately if you haven't got the players then you can't put that into action."

Ex-Liverpool striker Peter Crouch said on BT Sport: "They've got the right man in charge. He knows the club inside out and knows how the youth academy works.

"Their future is youth because they don't have money to buy players like they have. They have to build from young players up.

"They have some good ones but it's not going to be a quick process - it could be five years."