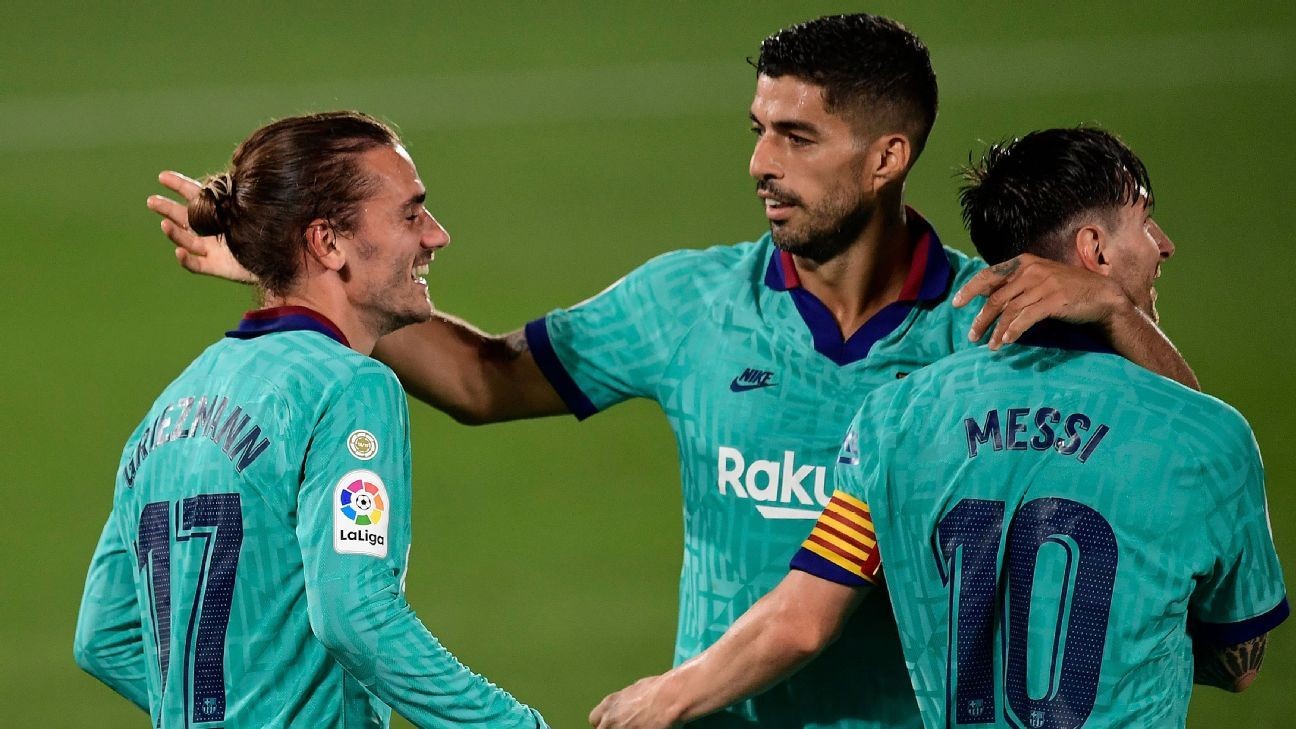 Barcelona produced their best display since La Liga restarted last month as they won 4-1 at Villarreal on Sunday but they remain four points adrift of league leaders Real Madrid.

Gerard Moreno cancelled out an early own goal from Pau Torres in an end-to-end opening before Barca put their foot on the accelerator.

Goals from Luis Suarez and Antoine Griezmann moved Quique Setien into a two-goal lead before the break. Lionel Messi had a goal ruled out by VAR for offside in the second half before substitute Ansu Fati put the gloss on the win late on.

Messi said before football was halted in March that Barca would not win the Champions League playing as they were playing. This performance, away from home against a Villarreal side unbeaten six games, suggested they may be turning a corner. It would be dangerous to get carried away, but there were more positives here than there have been in a long, long time.

Among the highlights was Griezmann. The France international has been in the spotlight this week after starting three of the last four times on the bench. He's kept his head down and worked hard on Sunday, though, and delivered the goods against Villarreal from a more familiar central role alongside Suarez.

And Messi, of course. No goals but two more assists. That's 19 in the league this season to pair with his 22 goals.

There were also big gaps in defence, especially early on, but maybe it has to be that way if Barca are going to get the most out of their attackers.

8 -- It's been a difficult week for Setien after back-to-back draws but he deserves credit for the shape change that brought the best out of Griezmann. Will hope this performance proves an inflection point because, while La Liga is drifting away, Barca still have the Champions League to come next month.

Barca's front three of Griezmann, Suarez and Messi were all in form as they routed Villarreal to remain in with a sniff of the league title. JOSE JORDAN/AFP via Getty ImagesPlayer ratings (1-10; 10 = best. Players introduced after 70 minutes get no rating)

GK Marc-Andre ter Stegen, 7 -- Made a smart save from Santi Cazorla only to see Moreno expertly turn home the rebound. Solid other than that and, once again, comfortable on the ball.

DF Nelson Semedo, 7 -- With the front three more narrow, his pace on the right will be important if Barca stick with this formation.

DF Gerard Pique, 7 -- A tough start but a relatively easy night in the end as Barca controlled a game in a manner which eluded them in recent draws with Celta Vigo and Atletico Madrid.

DF Clement Lenglet, 7 -- One hairy moment when he was sold short by Semedo, but recovered well and was solid alongside Pique.

Barcelona philosophy crumbling around Messi as Real Madrid deserve titleMessi, dressing room not a distraction - SetienBarcelona swapping Arthur for Pjanic was a business move but for all the wrong reasons

MF Sergio Busquets, 7 -- Broke up Villarreal counter-attacks and gave the ball to those ahead of him to do the damage in the final third.

MF Arturo Vidal, 7 -- Worked hard and on another night would have had a goal in each half, denied twice by Sergio Asenjo.

MF Sergi Roberto, 8 -- A really bright performance back in midfield. Good one-touch football and was cruelly denied an assist by VAR. There's a strong case to leave him in the middle and Semedo at right-back.

FW Lionel Messi, 9 -- Ran the game, forcing Villarreal to change their plan at half-time. Set up Suarez with a brilliant and determined run and then teed up Griezmann with a back-heel. Had his own goal ruled out for an offside early in the build-up and rocked the bar with a free kick in stoppage time.

FW Luis Suarez, 7 -- His brilliant first-half strike took him on to 194 Barca goals, level with Ladislao Kubala as the club's third top scorer of all time. Just Cesar Rodriguez (232) and Messi (630) have more.

FW Antoine Griezmann, 8 -- It's no coincidence that the Frenchman's best Barca performance in a while came as part of a front two. Crowned his display with a clever chipped effort from 20 yards.

MF Riqui Puig, 7 -- Fun and energetic once again. Is making a real case to be a first-team fixture next season.

MF Ivan Rakitic, 7 -- Did well after coming on, setting up one good chance for Vidal.

FW Martin Braithwaite, NR -- Introduced late on but still almost scored, forcing a great save from Asenjo in stoppage time.

FW Ansu Fati, NR -- The teenager's dream debut season continued with his sixth league goal of the campaign, cutting in from the left and finishing smartly.