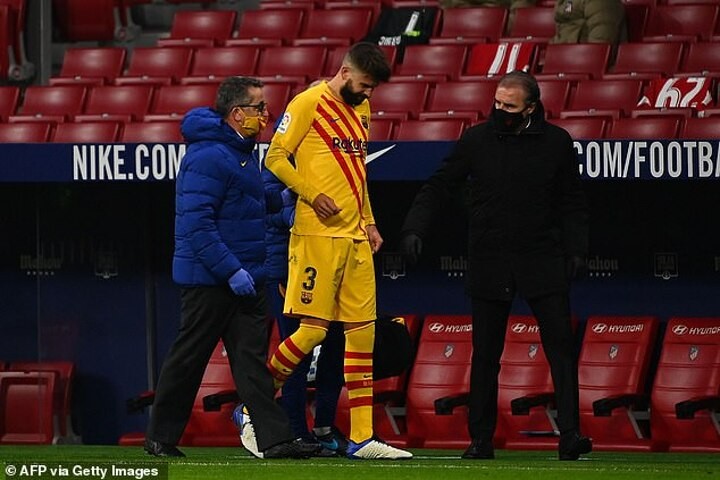 Barcelona's capacity to buy Manchester City's Eric Garcia in January will still depend on them selling players despite the club fearing the worst as Gerard Pique prepares to make a definitive decision over his knee injury.

Pique is due to meet with famed knee surgeon Ramon Cugat on Wednesday to discuss whether or not to operate on the injured ligaments in his right knee.

If the 33-year-old opts for rehabilitation without surgery and the decision pays off he could be back playing again in March in time for the Champions League but if he chooses an operation he will be out for the rest of the season.

Either way Barcelona need reinforcement having gone into Tuesday night's game with Dynamo Kiev with only one fit senior centre-half.

The 21-year-old B-team centre-back Oscar Mingueza did well in Ukraine but the situation is still drastic.

The problem for the Catalan club is that they pulled out of a deal to take Eric Garcia in the last window because they could not raise the 10m euros (£9m) up-front fee and the club's situation has not improved in the subsequent months.

Manchester City were demanding a fee of around 10m euros for the Spain international plus 10m in add-ons in October but Barcelona decided against the transfer preferring to wait for the 19-year-old to be free at the end of this season.

Now with Pique out, potentially for the season, they could try to go back to Manchester City but terms will not have improved and sales will still be necessary.

They could step-up their attempt to move players on. Junior Firpo and Martin Braithwaite both started on Tuesday night in the win over Kiev and Braithwaite will have caught the eye of potential suitors with an assist and two goals.

But there are two further problems for the club. If Braithwaite is sold coach Ronald Koeman wants the money spent on a replacement striker with Memphis Depay his preferred option.

And because elections have been scheduled for January 24 there will be just one week before the window closes for the in-coming president to make a decision on how firmly the club can push for Garcia.

If Pique decides on surgery emergency measures to bring forward the signing of Garcia could be activated but the decision is really one for the new president to make and he will not arrive until January 24.