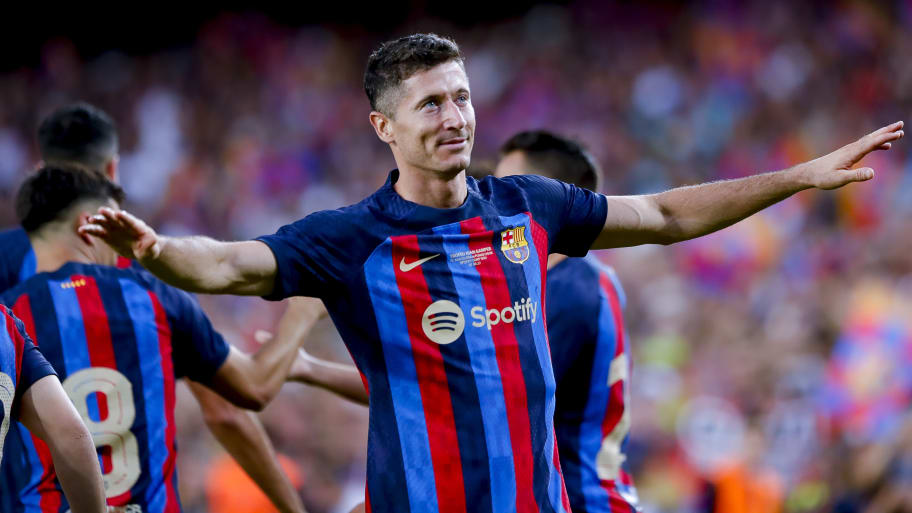 Barcelona won the friendly Joan Gamper Trophy with a resounding 6-0 win over Liga MX side Pumas UNAM on Sunday evening.

The match marked Dani Alves' return to Camp Nou just months after leaving Catalonia for Mexico. He was given a roaring ovation by a crowd of over 80,000 prior to kick-off and presented with a commemorative shirt and shield.

Robert Lewandowski scored his first home goal for the Blaugrana after just three minutes when he ran onto the end of Pedri's clever dink, rounded goalkeeper Julio Gonzalez and found the top of the net from a tight angle.

The lead was doubled shortly after with Lewandowski this time turning provider for Pedri, picking out his darting run into the penalty area and scoring in almost identical circumstances to the Pole, skipping past Gonzalez and tucking away.

Barcelona added a third after 10 minutes when Raphinha's low cross was caressed into the bottom corner by Ousmane Dembele, and Pedri had his brace another nine minutes later, again finding the net after a clever piece of skill from Lewandowski.

The Barça faithful had to wait until the beginning of the second half to watch their side chalk up their fifth of the evening, with Pierre-Emerick Aubameyang tapping in from an Ansu Fati cross.

Transfer column regular Frenkie de Jong added Barcelona's sixth with little over five minutes remaining as Xavi's men capped off pre-season in style. They will kick off their La Liga campaign at home to Rayo Vallecano next Saturday.