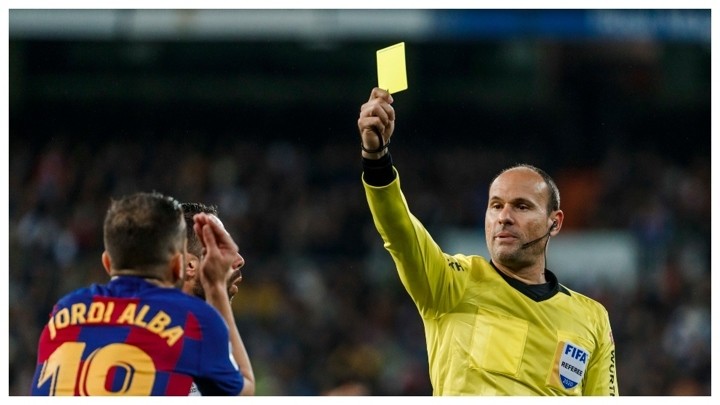 Discipline is one of many factors that could decide the LaLiga Santander title race.

Barcelona and Real Madrid have 11 fixtures remaining this season, but the threat of suspensions looms large, especially for the former.

Barcelona already have one suspension to contend with in their first game back, with Clement Lenglet unavailable for the trip to Real Mallorca after receiving his fifth yellow card of the season against Real Sociedad in March.

Samuel Umtiti, Luis Suarez and Jordi Alba are also just one yellow card away from a one-match ban.

As for Real Madrid, Ferland Mendy is the only player on currently on four bookings this season - he was replaced by Marcelo in the previous two games before the break in the campaign.

The major concern for Barcelona is that Lionel Messi has picked up three yellow cards this season - two in his last two games before the break - and is just two more away from a suspension.

Arturo Vidal, Junior Firpo and Sergio Busquets are also on three yellow cards, while Sergio Ramos, Luka Modric, Casemiro, Vinicius Junior and Dani Carvajal are all on that number for Los Blancos.

In LaLiga Santander this season, Barcelona have received a total of 62 yellow cards and five red cards, two of which have come from Lenglet.

The Frenchman is level with Facundo Roncaglia and Zou Feddal in the standings for the most red cards this season with two.

Lenglet's Barcelona teammate, Gerard Pique, has the joint-most bookings in the league alongside Roberto Soldado, Jonathan Silva and Mubarak Wakaso, even though Wakaso left Alaves for China in January.

Real Madrid, meanwhile, have received a total of 53 yellow cards and four red cards, with Gareth Bale, Alvaro Odriozola, Mendy and Modric the players to be sent off.

Jose Bordalas' side have received more yellow cards (92) than any other team in LaLiga Santander this season.

Real Sociedad's tally of 50 bookings for the campaign is the lowest, with Real Madrid the second lowest.

Real Valladolid and Villarreal are the only two teams yet to receive a red card this season.