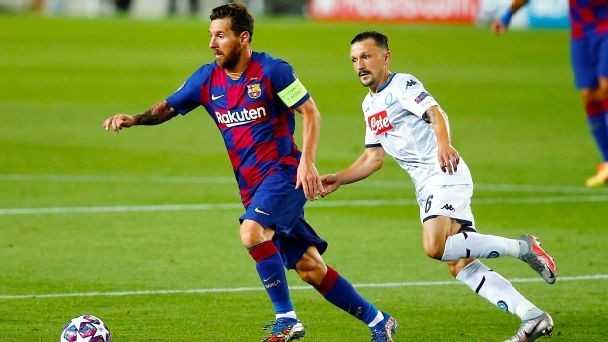 Barcelona moved to the Champions League quarterfinals 4-2 on aggregate after a 3-1 second-leg victory over Napoli at the Camp Nou on Saturday.

Clement Lenglet, Lionel Messi and Luis Suarez all scored in the first half to give the hosts a commanding lead before a Lorenzo Insigne penalty kept Napoli hopes alive just before the break.

But a spirited Barca wouldn't be denied after a nearly five-month wait to finish out the tie, and set up a last-eight encounter with Bayern Munich -- who advanced over Chelsea in Saturday's other game -- next Friday in Lisbon.

Barca, who extended their streak of consecutive UCL quarterfinal appearances to 13 with the win, started brightly and had their opener after just 10 minutes when France international Lenglet powerfully headed home an in-swinging corner from the middle of the box.

Messi added a second 13 minutes later with some impressive individual work inside the box -- the Barca star dribbling through a thicket of legs before losing the ball, recovering it and firing a curling shot around and past goalkeeper David Ospina while falling down.

Suarez scored Barca's third from the penalty spot in first-half stoppage time after VAR awarded a penalty following Kalidou Koulibaly kick to the back of Messi's leg in the box. The Uruguayan was handed the chance by Messi and didn't miss, sending Ospina the other way.

Napoli, though, responded with a penalty of their own moments before the half-time whistle. Ivan Rakitic fouled Dries Mertens in the area and Insigne converted to the bottom-left corner.