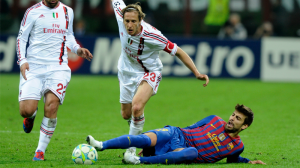 Any hopes of a shock summer move to Napoli have been quashed by Barcelona defender Gerard Pique, who insists he is content with the Spanish giants and will not be switching sides any-time soon.

During a live question and answer session on Periscope, the 29-year-old picked up on one eager fan’s request to trade life in Catalonia for the south of Italy and join his beloved team.

“I am great friends with Raul Albiol, he’s doing very well,” he replied.

“Though right now I am happy at Barcelona.”

Whilst perhaps disappointed at having failed to convince the Barcelona star to follow in the footsteps of several of his compatriots and make the switch to Naples, the Partenopei fan will be nonetheless pleased to have received such a response and must be applauded for trying his luck.