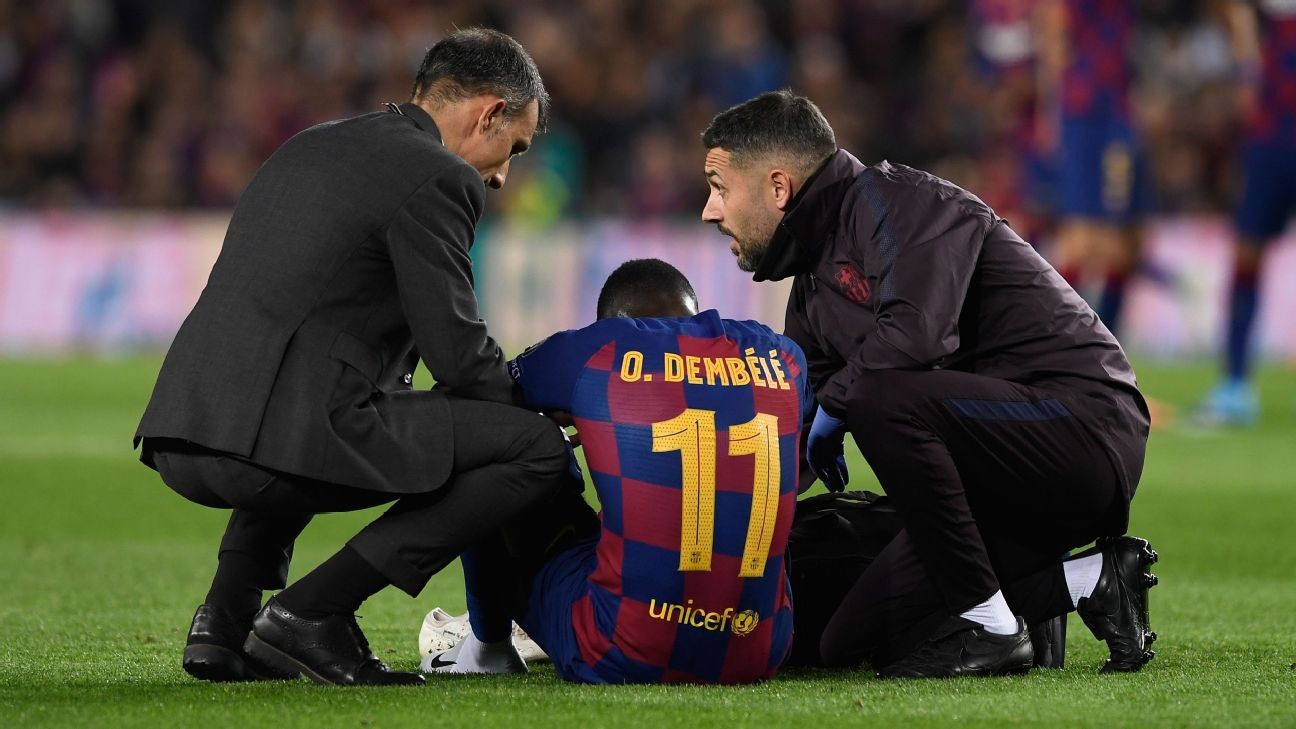 Steve Nicol considers whether Adama Traore's recent form could earn him a return to Barcelona.

Craig Burley explains how Barcelona's players can get out of position due to Lionel Messi's presence.

Barcelona expect to be granted permission by the Royal Spanish Football Federation [RFEF] on Tuesday to sign an attacker outside of the transfer window following Ousmane Dembele's latest injury setback, sources have told ESPN.

The Spanish champions opted against bringing in a forward in January when Luis Suarez was ruled out for four months, but were left short in attack last week when Dembele ruptured a tendon in training.

Dembele, 22, will undergo surgery on Tuesday in Finland and Barca believe the RFEF will allow them to turn to the transfer market once the France international is officially ruled out for the season.

However, the legislation will mean they can only sign a player already registered with a club in Spain or someone who is without a club.

Barca, meanwhile, only have a budget of up to €12 million to fill the vacancy, according to club sources.

There are various names on the table. Real Sociedad's Willian Jose and Alaves' Lucas Perez have both been considered, but sources have said there is a belief neither of their clubs would be prepared to cede on the price.

Real Betis' Loren Moron is also an option, but Quique Setien -- who worked with him for two years in Seville -- would prefer the club to look elsewhere. Setien was unimpressed with Loren's form in his second season with Betis.

Getafe's Angel Rodriguez, therefore, may prove the most viable option. The 32-year-old's release clause is worth approximately €10m.

The majority of the players under consideration were not deemed worth pursuing last month when Suarez's injury was confirmed. Sporting director Eric Abidal said in a recent interview Barca did not want to sign just for the sake of signing after last year's Kevin-Prince Boateng failure.

In a meeting on Monday, Barca had considered sticking to that stance, but in the end decided more depth was needed in attack, with Antoine Griezmann and Lionel Messi the only fit forwards in the first-team squad. Ansu Fati is technically still registered with Barca's B team.

New coach Setien had just 14 first team players available for Sunday's win at Betis. In addition to Suarez and Dembele, goalkeeper Neto was injured, while Gerard Pique was suspended. Pique will return against Getafe on Saturday, but defensive partner Clement Lenglet is banned.

In the meantime, Setien has been making up the numbers with B team players. Inaki Pena, Ronald Araujo, Riqui Puig, Alex Collado and Ansu have all been involved in some capacity in recent weeks. Best Place to Buy cheap cigarettes online visit smokersunit.com for best rates. Free Worldwide shipping. 100% Guaranteed.