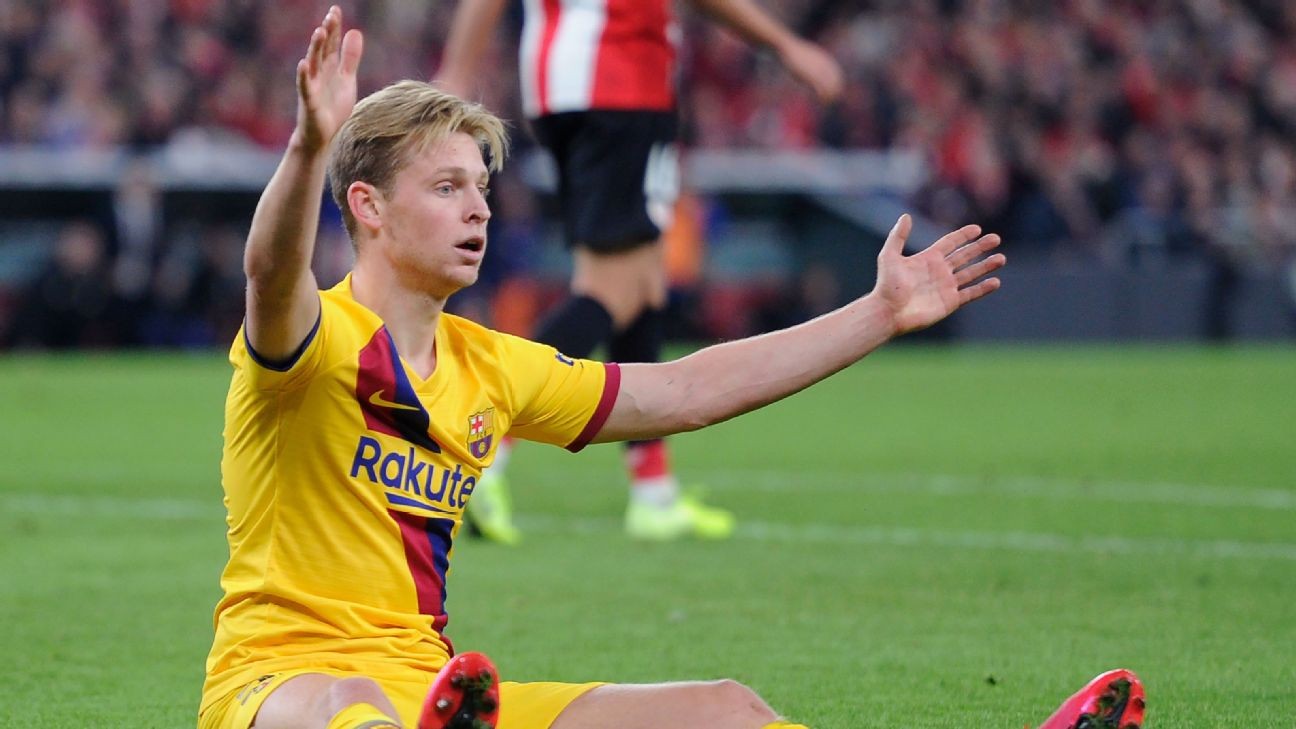 Gab Marcotti shares the latest on a potential reconciliation between Lionel Messi and Eric Abidal at Barca.

BILBAO, Spain -- Barcelona continue to feel victimised by referees after another big decision went against them in Thursday's Copa del Rey exit at the hands of Athletic Bilbao, sources have told ESPN.

Barca were denied a penalty for a push on Frenkie de Jong in the second half at San Mames and went on to see Inaki Williams score the only goal of the game in stoppage time to send Athletic into the semifinal.

The Catalan club have not protested the decision publicly but sources have told ESPN they feel the on-pitch decision was clearly wrong and "should have been reversed by the VAR."

It is the latest in a string of decisions that Barcelona believe have gone against them incorrectly. They had two goals ruled out against Atletico Madrid in the semifinal of the Spanish Supercopa and, from 2-1 up, went on to lose the game 3-2, with Ernesto Valverde sacked a few days later.

However, it was other decisions that went against Barcelona in that game which angered the club, according to sources inside the dressing room. Both Felipe and Saul Niguez committed infringements inside the box which did not lead to penalties and were not seemingly checked by the VAR, either.

Against Ibiza in the Copa del Rey, Fran Grima fouled Ansu Fati inside the area but referee Gonzalez Fuertes ignored the incident. Antoine Griezmann went on to score an injury-time winner against the minnows.

The draw with Real Sociedad before Christmas drew the most complaints.

Sergio Busquets was left confused as to why his foul on Diego Llorente had resulted in a penalty for La Real, while a similar incident involving Llorente and Gerard Pique at the other end, with the score locked at 2-2, resulted in nothing.

"I don't know why VAR didn't review [the challenge on Pique]," Busquets said after that game. "Those moments have to be looked at by VAR.

"But we don't know what's going on in the referee's head or when VAR should get involved. We don't know and we're not going to know because they don't say. They don't make any comments [about the decision process]."

De Jong also complained about the refereeing after that game and Barca president Josep Maria Bartomeu was left so unimpressed with events at Anoeta that he contacted his counterpart at the Royal Spanish Football Federation, Luis Rubiales, immediately after the match.

A week later, though, Barcelona did get a decision their way when Real Madrid felt Clement Lenglet's challenge on Raphael Varane in the Clasico should have been a spot-kick.

Barca were one of the teams to really push for the introduction of VAR in Spain but sources have said they have been bemused over its implementation at times.

Inside the dressing room after the loss at San Mames on Thursday, sources added that there was disappointment at losing the game and exiting the Copa del Rey, but there was also positivity following the nature of the performance and the belief that on another day -- with different refereeing decisions -- they would have made the last four.