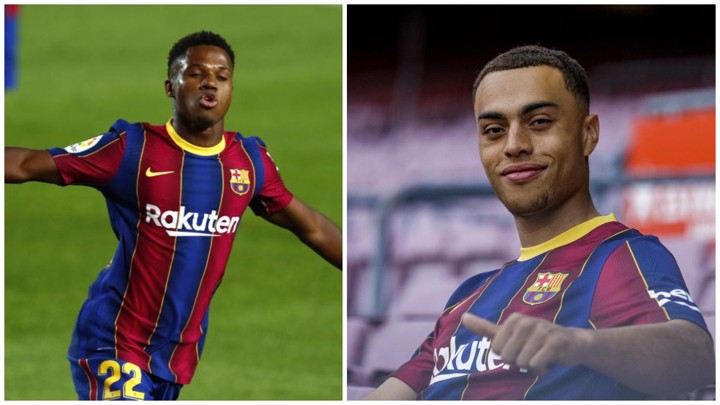 In their summer dealings, Josep Maria Bartomeu and co have been able to hide a few wrinkles in Barcelona's squad, yet it remains an ageing group.

Luis Suarez and Ivan Rakitic have both been allowed to leave, whilst Sergino Dest and Ansu Fati represent the youthful injection that the group so badly needed at 19 years old and 17 respectively.

One of the potential problems for Los Cules this term is that these two teenagers will play an important role for the team and will no doubt play a decisive part in any potential successes Barcelona have.

In the Champions League quarter-final against Bayern Munich there was a statistic that was overshadowed by what was on the scoreboard: the Blaugrana started with the oldest average age of a team to ever play in that stage of the tournament, with it clocking in at 29.6 years.

Since 2016, all of Los Cules' signings have been an average age of 23 years old, which is the ideal age to recruit talent, but on the pitch they haven't been a success.

Barcelona had just won the LaLiga Santander and Copa del Rey double, but they were eliminated in the Champions League quarter-final.

Of these seven signings only one remains at the club and that is Umtiti, and Barcelona would quite like to move him on this summer as well.

Luis Enrique departed the club and Ernesto Valverde was introduced as the new Barcelona coach. His spell in charge started with the shock news that Neymar would be leaving the club to sign for Paris Saint-Germain.

Barcelona reinvested the 222 million euros from that sale with Ousmane Dembele (20 years old) and then Philippe Coutinho (25). In addition to those high-profile deals, Los Cules also signed Marlon (21), Yerry Mina (23), Nelson Semedo (23), Paulinho (29) and Gerard Deulofeu (25). Only Dembele and Coutinho remain, although the French winger's future is very much in doubt.

The first transfer window after the disaster in Rome was one which left Barcelona needing to improve. Once again, they looked to the younger market with the only exception coming with the arrival of 31-year-old Arturo Vidal.

The French defenders are the only two left in the squad, and Todibo could be sold in the coming days.

Yet another Champions League nightmare left Barcelona reeling heading into the transfer market in 2019, as Bartomeu sought to rescue his presidency.

Two world-class footballers arrived in the form of Frenkie de Jong (22) and Antoine Griezmann (28), whilst Junior Firpo (22), Neto (29) and Emerson (20) joined them, although the latter went to Betis and is still in Seville. In the winter, Barcelona had to use an emergency transfer to sign Martin Braithwaite (28).

In the current market it has been difficult for Barcelona, who have been forced to slash their wage bill dramatically.

A veteran in the form of Miralem Pjanic (30) arrived to replace Arthur, whilst Pedri (17), Francisco Trincao (20), Matheus Fernandes (22) and Sergino Dest (19) have all been recruited.