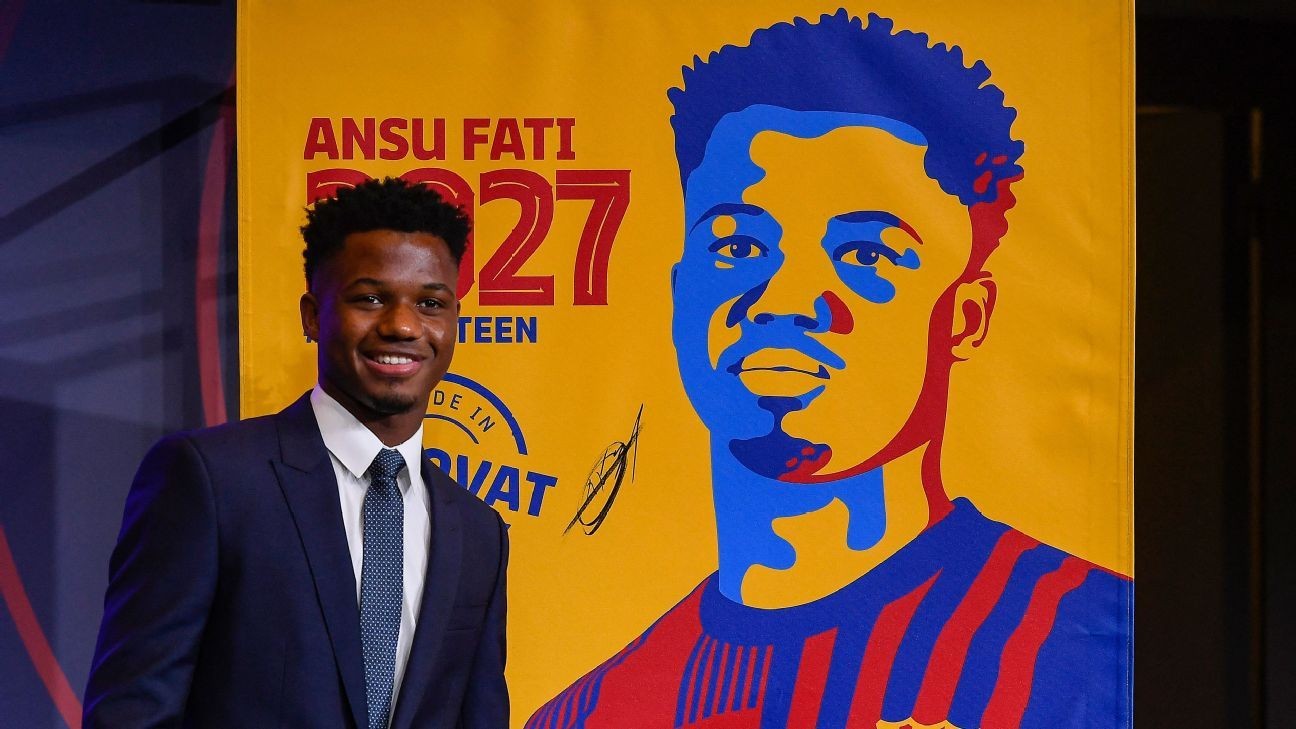 No pressure, kid. Ansu Fati came on for Barcelona at half-time of their Champions League clash with Dynamo Kiev on Wednesday night, at another time when it felt like his team needed him -- but on this occasion, he didn't score. The forward, who had two goals and an assist in just 116 minutes this season, after returning from an entire year injured, couldn't add to that in 45 minutes more. He didn't have a shot on target and didn't provide a telling pass either. In fact, when he had the chance to, he didn't take it, annoying Sergio Busquets and prompting Ronald Koeman to say: "I'll have to have a word with him."

Barcelona, Real Madrid and El Clasico: The people who made it the biggest match in soccer8hESPNEl Clasico preview: Everything you need to know about Barcelona vs. Real Madrid10hSam Marsden, Alex KirklandWho are the young players tasked with saving Barcelona?8dTor-Kristian Karlsen

In the club's offices, they were waiting for a word, too. And by the end of Wednesday night, Fati had done something more important: something else they needed. Over the other side of the concourse, past the club shop and beyond the ice rink, Fati's dad Bori, his agent Jorge Mendes, vice-president Rafael Yuste and the president Joan Laporta had prepared the papers. At 9:45 p.m. local time, it was official. Ansu Fati had signed a new contract until June 2027, when he will be 24. Yes, 24.

It was the news they had wanted more than anything else, the announcement bringing happiness and relief. When Mendes takes over and one of your players becomes his client, you can't help wondering if that's a prelude to a departure; it would have cut deep. The experience with Lionel Messi meant that however much they said a deal was close, you didn't want to believe it until it was actually done. But now it really was and there he was, smiling. "I'm very happy to be at this club that I love so much," he said -- this club that needs him, too.

At the end of Wednesday's match, which Barcelona won 1-0 against Dinamo Kiev, Ronald Koeman had insisted: "Ansu can't be asked to fix everything that Messi left us," but it can sometimes feel like that's exactly what is asked of him. The comparisons are inescapable, even more so at a moment like this. "You can't ask miracles of him," Koeman said, but people tend to. Hope lies in his hands. #DreamTeen, the renewal slogan ran. Fati's release clause will be €1 billion. He had already been given the No. 10 shirt in the summer. The symbolism was inescapable.

FC Barcelona vs. Real Madrid -- arguably the greatest rivalry in international soccer -- is back on Sunday, Oct. 24, at 10:15 a.m. ET. Sign up now to stream ElClásico on ESPN+

"Made in Masia," as the line had it, Fati had grown up at Barcelona. He had lived with Eric García's family and been represented by Messi's brother. Messi had made much of supporting him, too -- a recognition of the talent he saw and the warmth he felt. When he returned, assistant coach Alfred Schreuder described him as "very special for everyone here." Fati insisted he was 'as uno más' -- just another player -- and staff there confirm that there is no pretension about him, but increasingly that isn't true; this is not just another player. With Messi's departure, all the more so. On the pitch and off it: emotionally and economically too.

Oscar Grau, Barcelona's CEO, outlined dramatic figures of a club on the edge of bankruptcy, one whose brand value had been hit hard. One that needed a source of income and optimism, holding out for a hero, a symbol, a future. One like Fati, and his renewal underlines all that. Barcelona needed him maybe more even than he needed them, quite something for a kid.

When Fati scored against Levante on Sept. 26 in a 3-1 win, had that been his debut, it would still have made him the seventh youngest goal scorer in Barcelona's entire history. Instead, he was playing his 44th game and had come back from 11 months out with a meniscus injury. He had been through four operations, seeing doctors in Spain, France and Portugal, spending his final months working on his rehabilitation at a hotel in Madrid, alone. They had waited for him to return, increasingly desperately, holding onto the hope.

Fati's remarkable return for Barcelona, after nearly a year out injured, was quickly followed by a new, long-term contract. He's not feeling the pressure. JOSEP LAGO/AFP via Getty Image

Fati is still only 18 and was coming off the back of a year out of action, though wisdom suggests it's not weighing upon him. Everyone knew that, of course, but they couldn't help themselves, couldn't resist being drawn in. He didn't help them much either. "Give him time," people said, almost in spite of themselves, but time was something he never seemed to need.

At the end of September, Fati, who returned from a long, long injury, the kind that can end a playing career, came on as a sub and within 10 minutes, he had done it again. On Sunday, he made his first start. He scored of course, a brilliant goal -- dare you say, one with a touch of Messi about it. He won a penalty too. At the end of the game, Frenkie de Jong and Sergino Dest smiled, their fondness clear as they talked about how special he is, how he seems to change everything around him.

Fati is 18 and he's Barcelona's everything. Or so it sometimes feels -- to everyone else, at least. Not to him. He is not showing it, anyway. Watch him and football remains fun, no matter how serious it gets around him, no much how much responsibility he shoulders. It should be heavy, but he's happy. happy. Load it all on, he laughs it all off.

"It shouldn't be this easy to wear the No. 10 at Barcelona, but this guy is absolutely brilliant," the former Manchester City and Argentina defender Pablo Zabaleta said on ESPN FC TV. "He has shown why it's so important that he keeps himself fit, because he's the best player on the pitch by far."

How important it was that they kept him too, the "No Pressure Kid" just popping out to play.