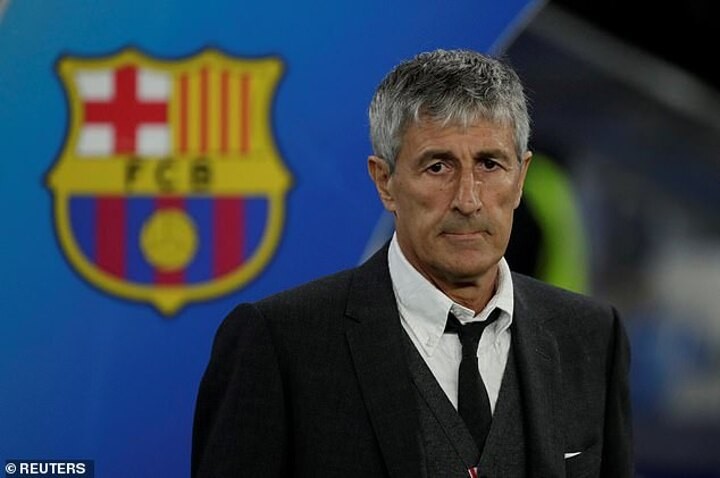 Barcelona are locked in a dispute with former manager Quique Setien over whether to pay out the remaining terms of his contract after he was sacked last August.

Setien was shown the door after Barcelona were humbled in a shock 8-2 defeat by Bayern Munich in the Champions League. He had been appointed in January 2020, on a two-and-a-half year contract from Real Betis.

Now, according to Cadena Ser, Barcleona wrote an explosive letter to their former boss saying they will not pay out the remainder of his terms, believed to be around £3.5m, because 'he didn't have the ability or attitude to coach the team'.

Barcelona also say in the letter that 'the second coach seemed to direct the games and training sessions' instead of Setien.

The Spanish publication adds that Barcelona are prepared to make that defence over their non-payment in court.

It is a saga that could bring Barcelona more negative attention with the club toiling in LaLiga under Setien's successor, Ronald Koeman - they currently sit third in the standings but are 10 points behind leaders Atletico Madrid.

And last summer, after the emphatic defeat by Bayern, star man Lionel Messi publicly revealed he wanted to leave the club but the Nou Camp outfit clung on to their talisman.

Setien said that he found Messi difficult to manage in his spell as Barcelona boss.

Speaking in November to El Pais, he said: 'I think Messi is the best of all time. There have been other great players who have been great, but the continuity that this boy has had throughout the years has not been had by anyone.

'Leo is difficult to manage. Who am I to change him if they have accepted him as he is for years and have not changed him?

Barcelona have also been grappling with the financial impact of the coronavirus outbreak with their first-team agreeing to pay cuts to help the club manage.

Setien only oversaw 25 matches as Barcelona, winning 16 of them and drawing four, with five defeats.