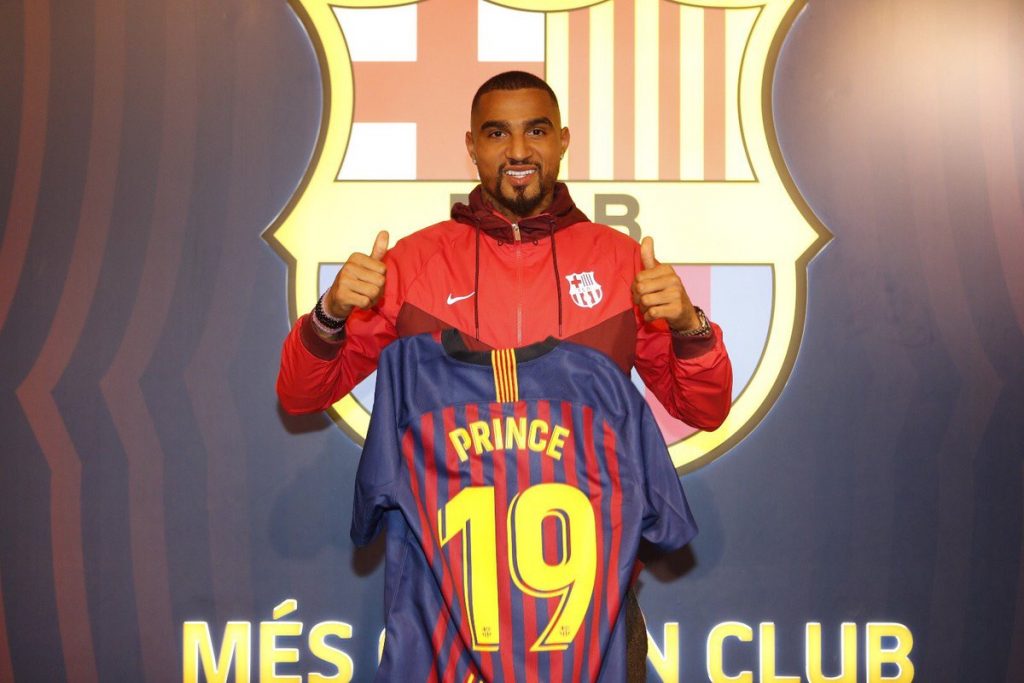 “No the other one, Kevin-Prince Boateng.”

“That guy who was at Las Palmas? Are you joking?”

This conversation overheard in a Barcelona newsroom on Monday is one that likely played out in a number of different variations across the city, if not the world, as the news of the most surprising transfer of the season broke.

Yes, it was true; Barça’s masterstroke signing to provide back-up for Luis Suarez at centre-forward in the crunch stage of a season chasing the treble is a 31-year-old who isn’t even really a striker, and had been playing for a team in the bottom half of Serie A.

At his presentation as a Barça player on Tuesday Boateng looked as surprised with the news as everyone else. “I said to my agent I would run all the way to Barcelona, not take the plane. I’m very happy.

“These couple of days have been incredible,” the former Tottenham Hotspur and AC Milan star said – unable to hide his awe at the move which had just unfolded.

Boateng made every effort to sell himself as a selfless team player who has no delusions that he will be a starter (“I’m a realist,” he noted). Barcelona need to work hard to sell the move to their fans, too. Sporting director Éric Abidal talked up the attacker’s experience in big games and his knowledge of La Liga.

One journalist even reminded the duo that Boateng once nutmegged the Barça legend in the process of scoring a stunning goal against Barça in the Champions League.

But that was eight years ago, and Barcelona haven’t signed the Boateng of 2011.

Nor have they even signed the Boateng that shone briefly in La Liga, his time there now two seasons in the past.

On Tuesday Abidal and the forward made an effort to turn the questions over his advancing age into a positive, insisting that Boateng has matured into a true centre-forward at Sassuolo and therefore fits the profile of the back-up number nine the Blaugrana are in desperate need of, following the sale of Munir to Sevilla.

The truth is though that while the deal is definitely left-field, it is no stranger than the other name doing the rounds in the Barcelona rumour mill in recent days, Carlos Vela.

If the choice of centre-forward is between a winger playing in MLS, or an attacking midfielder who has developed into a number nine in far more demanding Italy, Boateng suddenly doesn’t seem like the worst of options.

Both pursuits, and this week’s eventual signing, mean there are reasonable questions being raised in Spain about Barça’s transfer strategy in this winter window.

The former Ghana international has enjoyed a long and winding road to the top...

Yet the same could be said about when they signed Paulinho, Arturo Vidal, or even Ousmane Dembele, who was in no way considered an adequate replacement for one of the top forwards in the world when Neymar left for Paris Saint-Germain.

All of those moves have produced positive results for the Catalans, so perhaps the people making transfer decisions at the Camp Nou know something the critics and online experts don’t.

Even if Boateng and Barcelona deserve the benefit of the doubt, what may yet prove to be a missed opportunity however is the inability to find a player who more closely resembles Suarez in his style of play.

A reasonable case can be made for Boateng as a rotation striker to use in Copa del Rey and less challenging La Liga clashes, in order to give the Uruguayan some much-needed rest considering a persistent knee problem is still bothering the former Liverpool man.