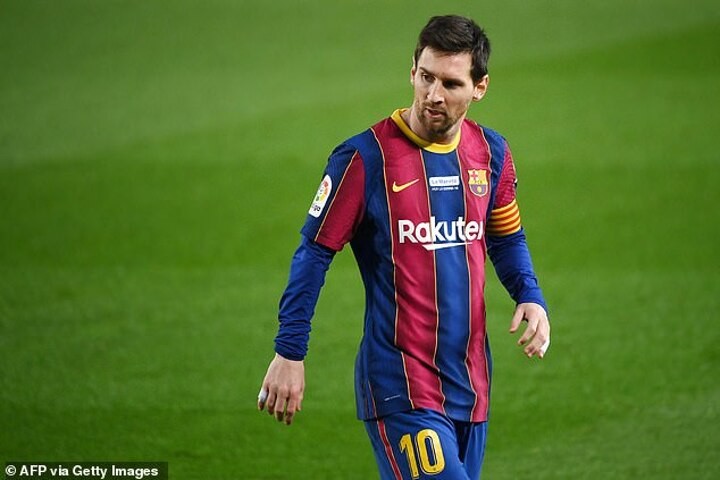 Barcelona's shock announcement that Lionel Messi will be leaving the club this summer has bizarrely been met by radio silence from the rest of the squad on social media.

The Catalan club sent shockwaves around the footballing world on Thursday evening when they confirmed Messi – who became a free agent last month – would not be re-signing at the Nou Camp despite the club claiming a long-term deal, albeit on lower pay terms, had been agreed.

The forward was prepared to take a 50 per cent pay deduction from his previous deal - which was worth more than £425million over four years - to adhere to LaLiga's financial fair play rules.

This would have seen Messi's earnings slashed by £250,000-a-week on the proposed new five-year contract. However, the 34-year-old was said to be happy to take the hit if it meant he was able to re-register as a Barcelona player with LaLiga.

In an official statement on the club's website, Barcelona claimed that Messi would not be extending his stay due to economic and structural obstacles (Spanish LaLiga regulations).

Barcelona followed this announcement up with a seven-minute tribute video on their social media pages, where they emotionally paid homage to arguably the game's greatest ever player.

However, there are still claims that Messi's exit isn't completely definite and that the Barcelona players' silence on social media could be a telling factor.

Just 24 hours earlier, LaLiga had announced a new deal with American investors that would mean a cash injection of €2.7billion (£2.29bn) into Spanish football in exchange for 10 per cent of the money the league makes from TV rights over the next 40 years.

Barcelona and Real Madrid did not welcome the news and now all eyes will be on club president Joan Laporta in his Friday's press conference to gauge a better idea of Messi's siutation and whether it's a big bluff with one of the best and most marketable players being allowed to leave the league.

There are also claims that the radio silence from Barcelona's players could be down to apprehension about paying tribute first, given Messi size and stature in the game.

However, one player that wasn't afraid to let his feeling be known on social media was former team-mate and PSG star Neymar.

The Brazilian liked a mock-up on Instagram of himself hugging Messi, who is wearing a PSG shirt amid reports he's destined to join him in Paris.

The image has now sent the rumour mill into overdrive, with many fans believing Messi has been talked around by the PSG cohort into swapping Catalonia for Paris.

PSG appear to be leading the charge for Messi as reports claim the 34-year-old is already negotiating directly with the French side and that the pair are trying to make a financial settlement.

It is believed that Neymar was crucial in reaching out to the Barcelona superstar - having met up with his former team-mate and close friend just days before the shock announcement.

Neymar left Barca for PSG in 2017 and has spoken frequently about his desire to play with the Argentine again one day.

He even uploaded an image to social media, showing himself with Messi along with PSG trio Angel Di Maria, Leo Parades and Marco Veratti, with the caption: 'amigos.'

Given his contract at the Nou Camp has officially expired, Barca will be powerless to stop Messi joining a major European rival this summer.