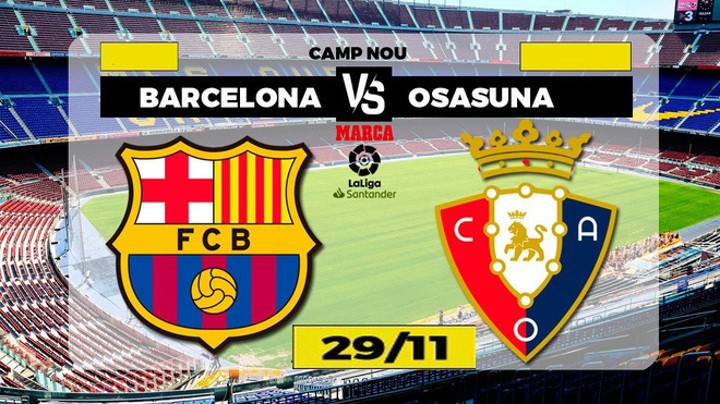 Barcelona host Osasuna at the Camp Nou on Sunday afternoon, but it's difficult to know what kind of performance the Catalan team will turn in as they've been so good in the Champions League but so poor in LaLiga Santander.

Osasuna have made life tough for the Blaugrana before, drawing with them in Pamplona last season and then winning at the Camp Nou in the penultimate round of last season on the night when Barcelona's title hopes flamed out.

For this weekend's match, between the 13th and 14th teams in the table, Ronald Koeman will have an extra fresh Lionel Messi. He didn't travel to Ukraine for the midweek win over Dynamo Kyiv, while Frenkie de Jong didn't go either.

There are several injuries, though, and Koeman is without Samuel Umtiti, Ronald Araujo, Ansu Fati, Gerard Pique and Sergi Roberto. Sergino Dest makes the squad list, but is a doubt.

Osasuna also have many injuries and this has been one of the main stories of their season. Chimy Avila fell injured before the campaign even began, while Adrian Lopez is the latest to end up on the medical report.

Aridane Hernandez is back, though, which is good news for Osasuna coach Jagoba Arrasate. He may not be ready to start and Osasuna could opt for a back three system with Unai Garcia, Raul Navas and Facundo Roncaglia.