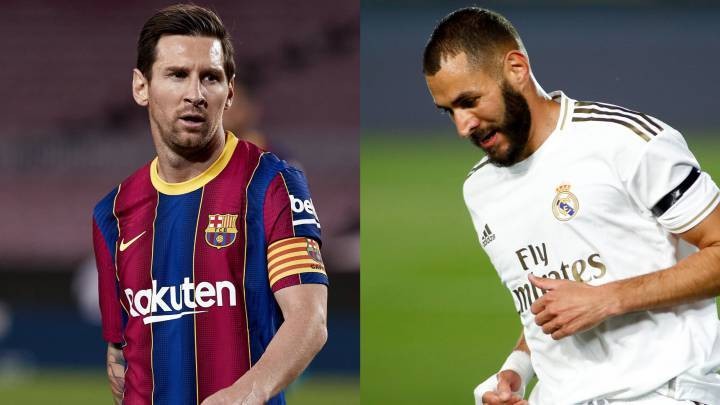 Barcelona and Real Madrid meet in the first Clásico of the 2020/21 season at Camp Nou, with both sides on 96 wins a piece.

Barcelona will host Real Madrid in an empty Camp Nou on Saturday 24 October, but Blancos boss Zinedine Zidane still expects the occasion to be as special one.

Both sides come into the game after suffering LaLiga defeats last weekend, although they had different fortunes in the Champions League mid-week. Having lost 1-0 away to Getafe in Madrid last Saturday, Barça bounced back by defeating Hungarian minnows Ferencváros 5-1 in their Champions League group opener. Madrid, however, had their embarrassing 1-0 home defeat to newly promoted Cádiz exacerbated by an equally embarrassing home defeat at the hands of Shakhtar Donetsk (3-2).

Losing home consecutive home games to such weak opposition has naturally put question marks over Zidane’s future. But all may be forgiven if Marid can secure a rare win over their arch rivals in the Catalan capital on Saturday, with the French coach acknowledging the game was an opportunity for he and his side to “redeem ourselves” amid the current mini-crisis.

Sergio Ramos was a big loss for Madrid midweek and his return for the Camp Nou clash will be a priceless boost to the visitors, who are looking to win two consecutive league games against Barcelona for the first time since May 2008.

Barcelona: Messi and Co will leave off-field issues aside

While Madrid may be experiencing a mini-crisis on the pitch, Barcelona finds itself amidst an unprecedented financial and institutional crisis that could culminate with the ousting of president Josep Bartomeu following a motion of no confidence referendum that could go ahead as early as 1-2 November.

The under-fire president, who was subjected to the white hankies by Barcelona fans before the coronavirus crisis forced all games to behind closed doors, will be one man inside Camp Nou who will be happy to have the game played in front of an empty stadium.

Having sent a scathing letter to the Bartomeu-led board on Thursday over their management of the crisis at the club, Barcelona’s captains – Lionel Messi, Gerard Piqué and Co – will leave the off-field issues aside as they look to secure a win over the current Champions.

El Blaugrana have not managed to score in their last two fixtures against Los Blancos (drawing one and losing one), which will be extra motivation for new boss Ronald Koeman to claim victory in his first Clásico on the coach’s bench.

As it stands in the overall head-to-head, both sides have recorded an even 96 victories. As Barcelona look to score their 400th goal against Madrid on Saturday night, they may take comfort in the fact that the last time Los Blancos won their first Clásico of the season at Camp Nou was back in 2007.

However, without their 90,000-strong support, it will be a very different Camp Nou encounter played under very different circumstances. The 97th victory is up for grabs, and both sides are equally determined to take it.

Ronald Koeman will be without first-choice goalkeeper Marc-André ter Stegen, as well as long-term injured defender Samuel Umtiti. Jordi Alba had been a doubt but made a fast-enough recovery – following a hamstring injury picked up against Sevilla on 4 October – to be included in Koeman’s Clásico squad.

Zinedine Zidane, meanwhile, has no natural right back available as both Dani Carvajal and Álvaro Odriozola are both injured for the clash. Eden Hazard, who has yet to play this season, is also out, as is Norwegian midfielder Martin Odegaard and striker Mariano.

Barcelona vs Real Madrid: What the managers said

Ronald Koeman: "I am sure they are not going to leave the spaces they have left in recent games. We are going to expect a more compact Madrid, with fewer spaces and, for them, it is important that Ramos is there. He is one of the best centre-backs and has a great personality on the pitch. Ramos can influence Madrid on Saturday."

Zinedine Zidane: “They’re a side who’ve always been a strong team. Each coach has brought different things to the team, but Barça are always Barça. A competitive side who know how to play good football and can make life difficult for you. I’m not going to go into great detail about their play, but it’s good for us to have a game like this against them, one that’ll be tough right from the get-go.”

Barcelona vs Real Madrid: Live on AS English

Remember that if you can’t be by a TV, you can follow every kick of the ball at Camp Nou with our very imitable live minute-by-minute coverage, right here on AS English.