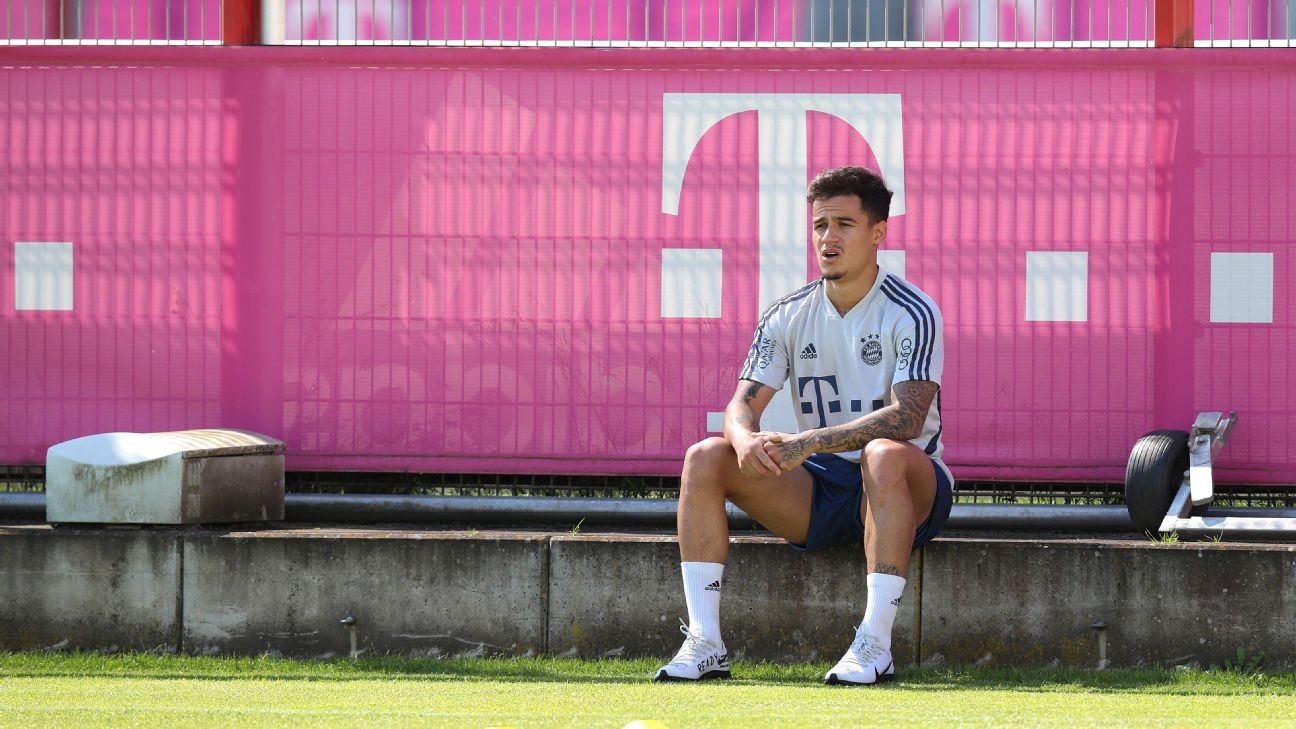 Barcelona wanted Philippe Coutinho so badly that they spent a whole summer chasing him, lost out, looked silly and still came back again four months later, making him the most expensive player they had ever signed. Lionel Messi wanted him too; he told the club president Josep Bartomeu so.

Andrés Iniesta said he had just the right profile to succeed. And the sporting director said he could be, well, Andrés Iniesta. As for Luis Suárez, he laughs at suggestions he played estate agent, but he did help Coutinho find a house. He also warned his ex-Liverpool teammate that it wasn't going to be easy.

Except, it wasn't supposed to be this hard.

The market had gone "mad," everyone knew (including the president, who was quoted saying that) and $135 million (€120 million) plus a further $45 million (€40 million) in add-ons was too much. But Barcelona had their strategic signing. "A necessity, not a whim," one headline claimed. The night before the Brazilian was presented in January 2018, Suárez insisted: "Coutinho will give us a lot." Ivan Rakitic said, "We know all about his quality."

They would say that, of course -- no one is ever going to say something to the effect of, This guy we just got is a bit rubbish -- but Suárez, at least, knew. He had described Coutinho as the man who gave Liverpool the confidence to keep the ball, whose "technical quality was so good" and "always chose the right pass." Perfect for Barcelona, there was cause for optimism. "Coutinho gets goals, provides assists and can help construct play. He can play inside or outside, right or left," said then-manager Ernesto Valverde. "He's an important signing."

These days, it's hard to avoid the feeling that Barcelona would settle for him being a signing at all ... for someone else. Anyone, anywhere. Draw a line under the whole thing and move on. Aged 25 when they brought him, Coutinho was supposed to be at the Camp Nou for years, a player for the future, a long-term solution. Two and a half years on, the only solution they see him providing now is economic, and even that is doubtful.

These days, the most expensive purchase in Barcelona's history is a problem.

Deep in debt, Barcelona need to raise $80 million (€70 million) this summer, according to reporting by Sam Marsden and Moi Llorens. Their budget already counted on them raising $140 million (€124 million) in sales this year, and that was before they were hit by the coronavirus pandemic. They've raised $70 million (€62 million) of that already, but they need more. Coutinho is the key, the player they think they can sell to balance the books.

Philippe Coutinho has disappointed at Barcelona and at Bayern, where it was hoped a successful loan would turn into a permanent move.

Internally, they cling to the idea that he has a market in England, where they can expect to raise $90 million (€80 million). That's only half what he cost, and even that might be optimistic. Barcelona thought much the same last season and, faced with a lack of credible alternatives, they ended up loaning him to Bayern Munich. In return, they got a fee of $9.5 million (€8.5 million) and someone else to pay his salary -- $15 million (€13.5 million) a year, after tax -- plus the hope of a lasting solution in the form of an option to buy. It wasn't long, though, before they knew that Bayern wouldn't be using it. So here they are again.

"It's purely Bayern's decision," said Coutinho's agent, Kia Joorabchian, this week, even as he knew their decision is probably to let him return to Spain. As for price tags, he insisted: "We haven't really discussed anything for now."

What Joorabchian did say was that Coutinho would like to return to the Premier League one day, and with every new day, it seems there is a new team interested, according to the media. Newcastle, Man United, Arsenal, Leicester ... you name them, so has someone else. It's an easy story to write, built on sand, sure, but built on a reality too: a willingness to engage with any potential way out.

At times, it feels almost desperate. There is a strange, almost sad sense to it all. That it should come to this.

It is an accepted truth that Coutinho was a disaster at Barcelona, born in part of this apparent agreement from everyone that now he has got to go. And yet it's an agreement that could be usefully challenged and, like so many accepted truths, this "truth" is not entirely true. In his first half season in Spain, when Coutinho could not play in the Champions League, there were moments. There was also a league and cup double, a goal in the Copa del Rey final included. He scored 10 goals in 22 matches. His second season began with the opening goal in the clásico.

And yet it's also true that he was an uneasy fit and that things slid away from him fast, the weight of that transfer fee and the expectations accelerating his fall -- or, at least, impressions of it. He scored a solitary goal in his last 20 league games and long felt out of place. There had been shifting positions and formations, that awkward sense that his best games came without Messi on the pitch. There were injuries and impatience, along with doubts as to what he was: midfielder or forward?

"I always thought that Coutinho was the ideal replacement for Iniesta," said sporting director Robert Fernández, but how could he be? He wasn't the same, as a player nor, it seemed, as a personality. Valverde preferred to play Coutinho on the left side of a front three, not a middle three, although he did move him about. The Barcelona manager also said he liked the fact that Coutinho kept trying things, but there was instead a nagging feeling that he was trying ever less, turning in on himself. He looked timid, sensitive.

Maybe that trait was always there: Suárez recalled telling him to "relax, just play" at Liverpool; while at Bayern, Karl-Heinz Rummenigge suggested he was inhibited at times. At Barcelona, that is always an issue. Suárez had warned Coutinho, you have to be strong, ready for criticism and pressure at a place where players are exposed and fans whistle. Which they did -- only Coutinho responded, showing how it hurt him. When he scored against Man United in the Champions League, Coutinho celebrated by putting a finger to his ear.

"The smallest thing you do -- the smallest little thing, like Philippe did the other day, which was tiny -- [brings repercussions] and everything is made bigger [than it really is]," Suárez said. "[A player] hears it when he loses a ball, and there's this zzzzzhhhhhiiii, he hears that buzzing, that murmur there is, and that affects him, and he thinks, 'Ay, the fans, ay, if I lose another ball.'"

Coutinho did. Soon, it was not just the ball that was lost, they concluded; it was him. Bayern followed, offering a fresh start but a false one. He was there for only for a year, and they don't want to keep him, so he must return to Barcelona, if only to pack his bags. And then what? Now where? Now who?

If Barcelona think he could be a $90 million (€80 million) footballer, they also know he probably isn't. If they want to sell him, they also know that a loan would at least give them breathing room and might be the only solution. But even a loan is no guarantee, not without them shouldering some of his wages. There might be no winners.

The Brazilian is not the only player to be trapped in a gilded cage, a prisoner of his price and his salary, an asset in a market that no longer exists for him -- James Rodríguez and Gareth Bale come to mind. And nor is he the only player Barcelona are desperately, perhaps fruitlessly, trying to use to raise funds to sign someone else they might end up trying to get rid of in a year's time. But his case is particularly striking, like it's settled already.

Coutinho is Barcelona's record signing, having joined from Liverpool for over €140 million in 2018.

The strategic signing, the most expensive player ever, the 27-year-old: finished here, no future at the Camp Nou. Coutinho should be in his prime, but it's like everyone has given up, as if he and Barcelona represent a relationship broken beyond repair, with everyone throwing in the towel after just 18 months wearing a shirt that weighs heavy and that others have been given twice as long to adapt to. Even though the manager is not the same as earlier, the identity isn't either, even some of the teammates aren't. Even though nor, in all probability, is he.

So much for the strategic signing. Instead, they look for an exit strategy. As badly as they wanted him, they want rid of him. They look at Coutinho and all they see are dollar signs, pictures of other players his sale could help subsidize ... but what if he can't? What if he his currency is devalued, the exchange rate plummeting? Deep down, Barcelona must know that. Just as importantly, Coutinho's suitors sense it too. Barcelona can't help but be aware that their position is weak or fear being stuck. Everyone does, and no one is entirely happy.

And so here we are, locked in this lingering sense that everyone is waiting for some club somewhere to come and rescue them all, breaking the stalemate. Take a step back, though, and you can't help wondering if in the event of being stuck it might be better to seek other solutions. If, in fact, being stuck could end up being the solution. If, right now, everyone lacks the imagination to resist being drawn into that spiral and instead lift their heads and look beyond a depressed market place and a depressed player, beyond a scenario where an exit is the only strategy, however it comes about.

What do you do with a problem like Coutinho? Well, if all else fails, you could try playing him.