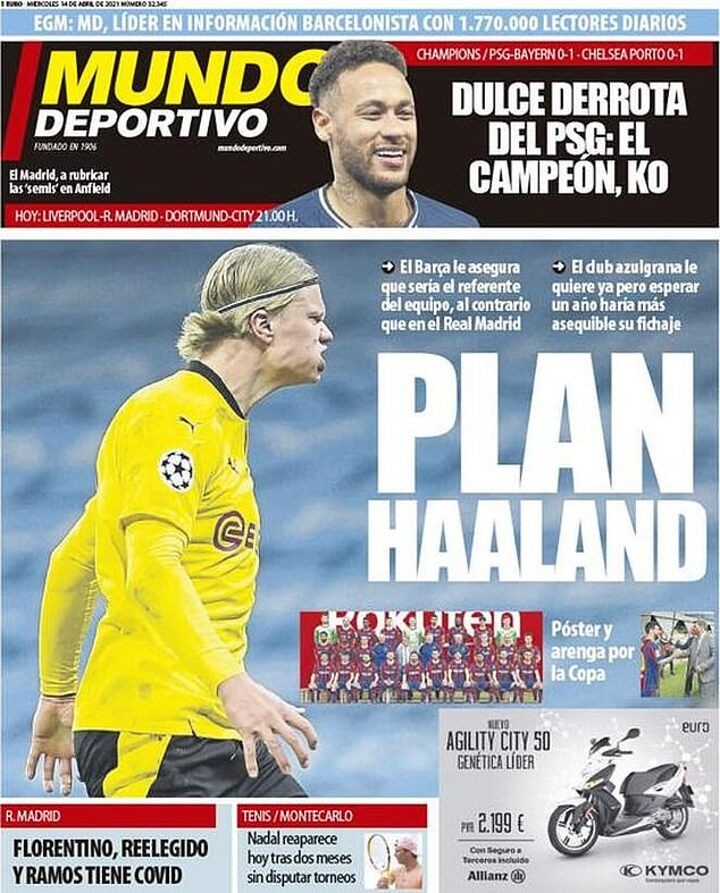 Barcelona want to convince Erling Haaland to move to the Camp Nou by assuring him he will be the team's reference point, according to reports.

It would cost the Catalan giants significantly more to sign the £154million Borussia Dortmund star this summer rather than next, when Haaland's £68m release clause becomes active.

El Mundo Deportivo reports that Barca would prefer to sign the 20-year-old this transfer window but are happy to wait until next year if it means the move will be more financially viable. They have stepped up their offensive by telling the 20-year-old he would play a more important role for them than their fierce rivals Real Madrid.

The Spanish sports daily's front page on Wednesday morning read 'Plan Haaland', with the news that Haaland would be the team's 'reference point', unlike at Madrid, and that waiting a further year would make his signing more 'affordable'.

Haaland's agent Mino Raiola and his father Alf-Inge recently visited both Real and Barca, which sparked rumours the striker was destined for Spain.

The report states that Barca see Madrid as their main competition for Haaland's signature and are determined to one-up los Blancos.

Returning Blaugrana president Joan Laporta is hoping he can tempt the Norwegian to the Camp Nou by assuring him of his role in the club's project.

Real president Florentino Perez's preferred target is said to be Paris Saint-Germain's Kylian Mbappe, and so Haaland would have to compete with him and the likes of Karim Benzema for centre stage.

Barca, meanwhile, are keen to emphasise that he would first get the opportunity to play with Lionel Messi and would then become the team's main man when the Argentine eventually leaves.

Laporta is hopeful this could sway the deal Barca's way, despite their financial difficulties meaning they are unlikely to better Madrid's terms.

Haaland is said to be worth £154m and this week reports stated that Raiola was looking to make him the first £1m-a-week footballer.

Manchester City and PSG are just two of the striking sensation's other suitors, and it remains to be seen whether either of the Spanish giants has the financial ability to sign Haaland.