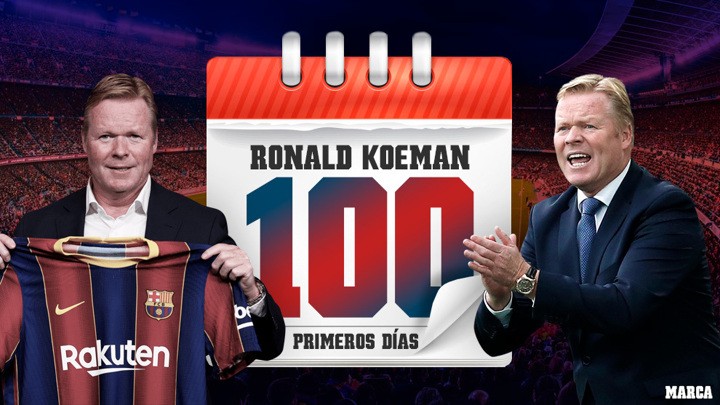 When new governments are formed, it's said that they are given a 100-day period of grace, which in theory allows them to make their plans and get to know their surroundings before being judged on their performance, and it's a period not often afforded in football.

Given the scale of the task on offer to Ronald Koeman when he joined Barcelona this summer, many were keen to allow him a settling-in period, but now that time is nearing an end.

The Dutchman arrived at a complicated time with the club in an economic and organisational crisis, with a president on the way out, no clear replacement and his star man demanding to leave.

Here are the key points of his first 100 days.

If there's something that is certain at Can Barca, it's the authority of the coach, which he has clearly established quickly, unlike some of his predecessors.

With that authority, it has allowed Koeman to make decisions and take measures which the players must respect.

It's evident that there has been a change in Barcelona's style of play, but it's still some way off Barcelona's best.

The team try to press high when out of possession, but when on the ball they struggle to make an impact due to the slow circulation of possession.

One of Koeman's major tasks is to get the best out of Lionel Messi, something which he still hasn't been able to do with the captain unrecognisable this season.

It seems that there's a good relationship between the two, at least when compared to what he had with Quique Setien, but that isn't reflected on the pitch.

If he is to stay at the club and get back to his usual best, it's a slow process.

Wins still aren't coming through consistently as the team win in the Champions League but struggle in LaLiga Santander.

This season has been the club's worst start to a league season in 29 years, dropping points early on in the campaign which could be difficult to recoup.

When Koeman speaks, it's clear what he's trying to say, both in the dressing room and in press conferences.

At times, he can seem a little blunt, but he doesn't hide away from saying when he doesn't like something and it's not a common feat for a coach at his level.

The ex-Everton coach has led a form of revolution in how the squad train, demanding that the squad play like they train, with more intense and demanding sessions.

Right from the start, the coach has switched to a 4-2-3-1 shape with Frenkie de Jong alongside Sergio Busquets in midfield.

It's yet to be seen if that's the best solution for the team.

Koeman isn't afraid to play young talent, despite their age, like some of this season's stars including Ansu Fati and Pedri.

The former Netherlands coach knows that this is a complicated time for the club and is happy to work with what he has, not complaining even when the signings he asked for are not made.

Koeman doesn't hold back when criticising referees who he feels are working against his team, even though it brings him problems with the authorities.