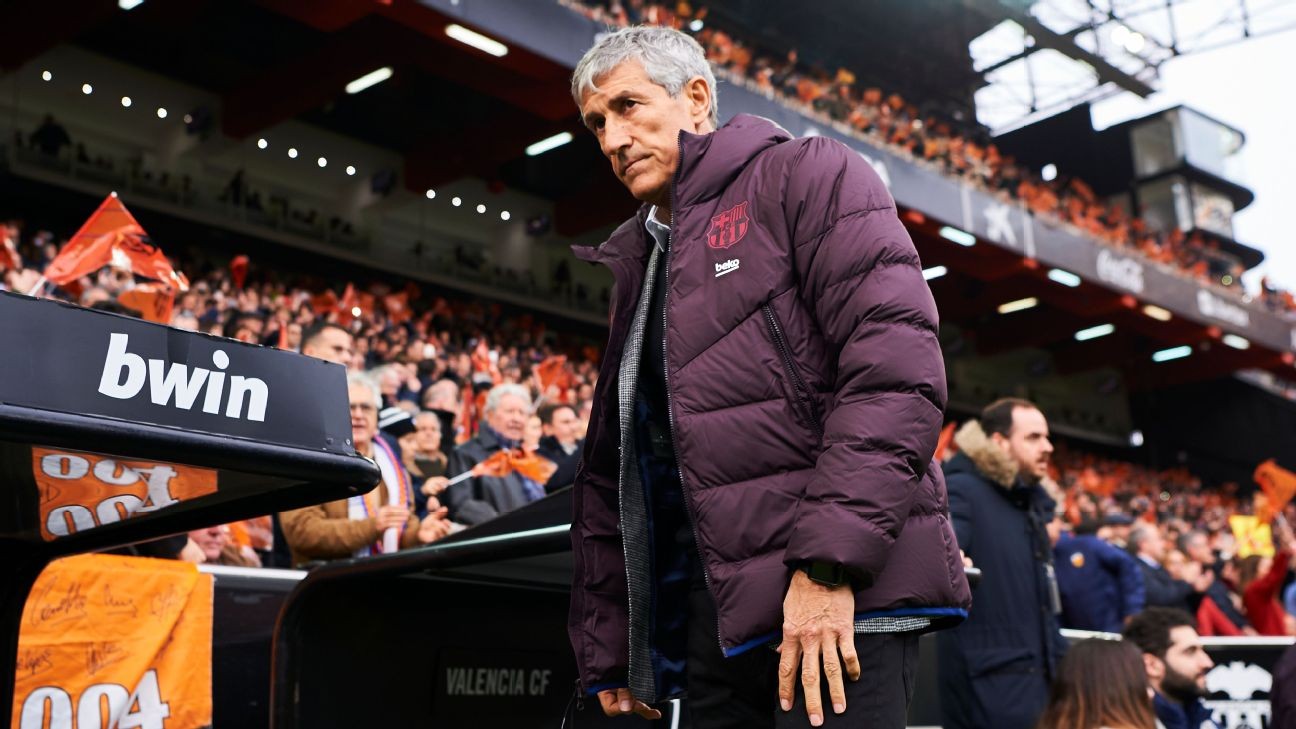 VALENCIA, Spain -- Following narrow wins against Granada and Ibiza, Quique Setien failed his first major examination as Barcelona manager when the Blaugrana crumbled 2-0 against Valencia, their first defeat at Mestalla since 2008.

Marc-Andre ter Stegen saved a first-half penalty from Maxi Gomez and Barca made it to half-time with the game goalless, but Jordi Alba put through his own goal three minutes after the break and, after Setien's men were unable to make their chances count, Gomez added the second in the 77th minute to seal Valencia's win.

For Barca, a sterile possession approach quickly changed to a "give it to Lionel Messi" stance after they fell behind. Their talisman ended the game with 11 shots, the most he has ever had in a Liga game without scoring.

The warning signs for Barcelona had been there against Ibiza in midweek, when the third division side scored with their first attack and could have been 3-0 in front by half-time. A late Antoine Griezmann brace spared humiliation, but Setien admitted he had been given a "fright."

Against Valencia, with no rescue job by his star men, he got a pasting. Setien suggested ahead of the game that "every day is a test" at Barcelona and this was his sternest yet.

The hosts won a penalty with their first attack and openings kept coming. After failing from the spot, Gomez hit the bar and Kevin Gameiro missed from the rebound; all the while, Ferran Torres was enjoying the freedom of the right flank.

Quique Setien suffered his first loss as Barcelona manager as his side went down at Valencia.

Setien's discourse since taking over has focused on the need to have possession to maintain control. While Barcelona have the ball, he reasons, the opposition cannot score. When they lose it, they must win it back quickly, otherwise the defence is exposed. Such was the case against Ibiza and Valencia.

"The players still aren't interpreting well what we want to do," Setien bemoaned after the loss. "Or maybe we're not explaining it well. No one likes what we've seen today. Positionally, there are things to correct and improve."

Messi can offset many a flaw, and he fizzed one effort just wide from 18 yards, then saw Gabriel Paulista emerge from nowhere to block what looked like a certain goal. Barca chances were few and far between, though, and Jaume Domenech had to make few saves you would not have expected him to stop.

This reality check brings into question whether renovations can be carried out in midseason, with Barca still competing for three trophies. Ernesto Valverde was sacked, in part, for being too pragmatic, but some might argue that was down to necessity; for example, is this Barcelona squad, packed with players over 30, capable of pressing high for 90 minutes?

Time will provide the answers, and if there is one thing to which Setien is committed, it is his philosophy; the one he links to the legendary Johan Cruyff and the one that almost exclusively landed him the job 12 days ago. He will not change.

"We have to adapt to the new coach, take on his ideas," Sergio Busquets said.

Barcelona have looked comfortable in possession under their new boss, but must speed up their ball circulation to create opportunities against better sides. It is true that Setien has not been helped by injuries: Luis Suarez is out for four months, while Ousmane Dembele is two weeks away from a return.

Real Madrid will top La Liga if they do not lose to Valladolid on Sunday, but winnable home games against Leganes and Levante lie ahead for Barcelona, as does time on the training ground to work on Setien's concepts.

They may have failed at Mestalla, but the 61-year-old is adamant about a style that, he believes, gives his teams the best chance of winning games. One flunked test will not see him change his ways, but many more days like this and he might not last beyond the summer.