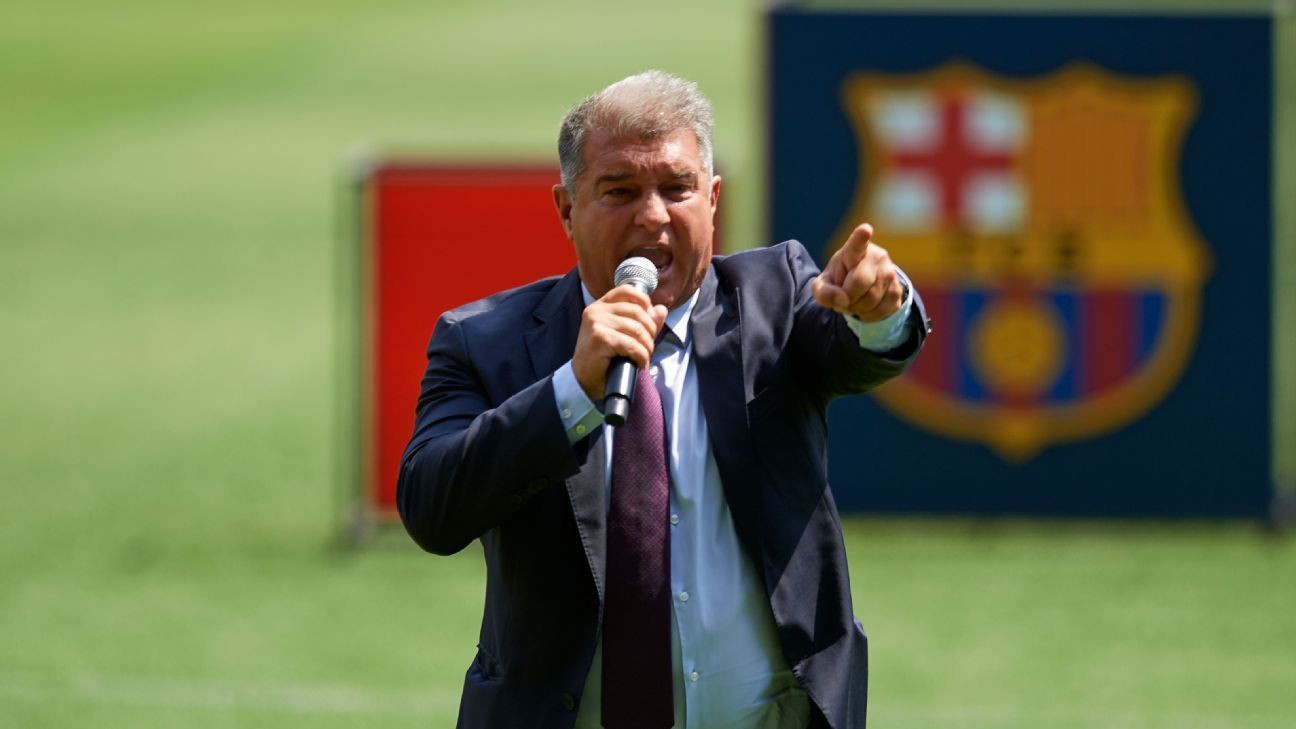 There have been player presentations almost every week at Barcelona this summer. July began with the unveiling ceremonies of Franck Kessie and Andreas Christensen, two players signed on free transfers. Then came Raphinha from Leeds United, Robert Lewandowski from Bayern Munich and Jules Kounde from Sevilla at a cost of over €150 million in combined transfer fees. Sources have told ESPN more signings could follow, too. Chelsea left-back Marcos Alonso is expected to move to Camp Nou and Manchester City's Bernardo Silva remains a target, albeit a slightly more unattainable one at this stage.

Barca president Joan Laporta has delivered on his promise to back coach Xavi Hernandez by building a competitive squad capable of competing on all fronts, but in doing so, questions have been raised about Barca's spending. Laporta himself described Barca as "clinically dead" last year, with gross debt totalling €1.3 billion. As recently as June, he said the club was still in intensive care. Less than a month later, he was signing Lewandowski for €45m and declaring the club to be "out of the hospital," prompting Bayern coach Julian Nagelsmann to wonder out loud: "The only club that has no money but buys every player they want. I do not know how. It's kind of crazy."

The source of Barca's spending is not difficult to understand. In selling off 25% of their domestic television rights to the investment firm Sixth Street for 25 years and 24.5% of Barca Studios, their in-house production company, to Socios.com, they have raised over €600m. They have also recently signed a new sponsorship deal with Spotify, and last year, the club took out a €500m loan from Goldman Sachs to spread out their debt repayments.

The money, therefore, is there, even if it does come at a cost in terms of reduced revenue in the future and growing long-term debts, but finding the cash this summer was not Barca's biggest problem. As was the case when Lionel Messi left last year, the problem is registering new players within LaLiga's financial fair play rules. With the new campaign starting on Saturday, none of Barca's signings are yet signed up with the Spanish league.

(Editor's Note: This page will be updated as the situation develops with Barcelona this week.)

LaLiga's financial regulations are perhaps the strictest of the top European five leagues. Each Spanish side is given a spending cap that denotes the maximum amount they can spend on the first team in relation to players and coaching staff, a figure that includes wages and transfer fees. Lewandowski's cost on the books, for example, would be his salary plus €12.5m as his fee is amortised over the length of his four-year deal.

Stripped back in the simplest terms possible, the limit is essentially a calculation of what the club can afford based on revenue against outgoings and debt. It is also applied prior to signings so if a club does not meet the criteria laid out by the league, they can't register new players. This is where Barca find themselves just days before their season opener, a home date with Rayo Vallecano.

Barcelona president Joan Laporta is working tirelessly against the clock to ensure all of the club's new signings can actually play. Jose Breton/Pics Action/NurPhoto via Getty Images

The spending caps shift all the time, but at the end of last season, Barca's cap was -€144m (it was around €600m prior to the pandemic), the only negative limit in Spain, prompted by losses across the previous campaign of over €400m. Barca's wage bill, meanwhile, including amortisation payments, remains around €500m. While they are outside of their limit, the league only allows them to spend a fraction of what they make in savings on wages, whether through reductions or player exits, and in fees. The ratio has been 1-to-2, 1-to-3 and 1-to-4 at different times over the past year, the most frequent being 1-to-4, which means they can spend 25% of what they make or save.

Barca hoped the sale of television rights and a stake in Barca Studios would increase their limit sufficiently for them to operate at a 1-to-1 ratio and register all their signings. LaLiga informed them last week they are still not there yet, and as a result, they still cannot register all their new signings.

A league source told ESPN that doesn't mean they can't register some of them, although who would depend on the cost and combination of players. (For example, less salary space is required to register Christensen than Lewandowski.) Barca would rather not go down the route of appearing to prioritise registrations if they can avoid it.

Which players are impacted?

With just days until Barca host Rayo Vallecano at Camp Nou in their first game of the season, none of the five summer signings -- Lewandowski, Raphinha, Christensen, Kounde or Kessie -- has been registered with the league. The Blaugrana have also not yet registered the new contracts signed by Ousmane Dembele or Sergi Roberto, either. Therefore, these seven players are currently not eligible to play for Barca, despite featuring in the preseason.

play1:44Could Barcelona start the season without their new signings?

Julien Laurens asks Gab Marcotti if Barcelona may be forced to start the new season without having registered their new players.

What do they need to do to register players?

Simply put, Barca need to sell more assets. The sale of television rights (which gives up an estimated 5% of the club's annual revenue at around €40m, based on the most recent figures) was done in two packages, with each one dubbed a "financial lever" by Laporta. The sale of 24.5% of Barca Studios was the third lever. Now, league and club sources confirmed to ESPN, a fourth lever is needed to enable the registration of all seven players, which is expected to come in the form of another 24.5% of Barca Studios this week.

However, some sources suggest that will still not be enough and the club will still come up just short in terms of registering everyone. Therefore, the club continue to work on outgoings -- Samuel Umtiti, Martin Braithwaite and Memphis Depay have all been advised to find new clubs -- and wage reductions. Talks are ongoing with Gerard Pique and Sergio Busquets, among others, to find a solution.

The club have also said publicly that midfielder Frenkie de Jong, the subject of interest from Manchester United and Chelsea, needs to reduce his salary if he does not leave the club. Getting €85m in transfer fees for the Dutch midfielder would solve a lot of their problems, but sources say he remains intent on staying put.

This is all a repeat of last summer, too, when Pique, Busquets and Jordi Alba adjusted their salaries to enable the registrations of Memphis, Eric Garcia and Sergio Aguero.

It's worth noting that last summer, the solution arrived just as late. Pique's adjustment allowed Barcelona to register Garcia and Memphis on Saturday, Aug. 14 -- just 24 hours before their first game of the campaign, which was a 4-2 win over Real Sociedad. Yet it took until the day before the end of the summer transfer window for Alba and Busquets' reductions to kick in so the club could confirm Aguero's registration with the league.

What is their timeline for doing so? Any deadlines?

Technically, Barca have until the end of the transfer window (Aug. 31) to register players with LaLiga, but Saturday's first game of the season is a date marked in red. All five new signings have played an active role in preseason, along with Dembele and Sergi Roberto. No one wants to be the player -- or players -- left unregistered for the Rayo game this weekend.

Barca need the paperwork for the fourth financial lever, which is not yet official, to be approved as soon as possible, but players can be registered right up until the day of a game.

If they can't get players registered before this weekend, then what?

This is where things get murkier. Barca have until the close of the transfer window to register, but they may have some unhappy players and agents if things are not sorted before then. Beyond that, it's uncertain what has been included regarding potential escape clauses in each players' contract. Given Barca's financial issues have been well documented, one football industry source says it would have been irresponsible if the agents involved had not negotiated clauses for the scenario whereby their client remains unregistered.

It should be stressed that Laporta continues to transmit confidence that everyone will be registered, but if they are not, there are various options, such as exercising possible escape clauses, going out on loan or spending the next five months in the stands until the January window opens.