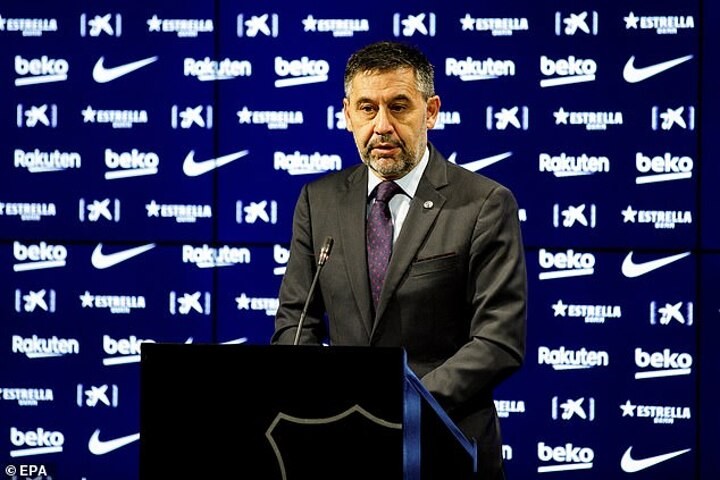 Barcelona president Josep Bartomeu claims that the club will 'win a title this season' after he prevented Lionel Messi from leaving the LaLiga side.

Messi, a six-time Ballon d'Or winner, had been at war with the club as attempted to push through a move to the Premier League to reunite with Pep Guardiola at Manchester City.

Messi did, however, commit his future to the Nou Camp to avoid taking Barcelona to court after Bartomeu made it clear he had no legal ground to stand on due to the €700million (£630m) release clause in his contract.

Bartomeu came under fire for the way in which he handled the situation, with hundreds of fans flocking to the Nou Camp demanding the president be ousted.

Reflecting on his decision to prevent Messi from leaving, Bartomeu told Goal: 'Our priority was keeping Messi as part of our new project so I decided against starting a discussion.

'I had been accused of forcing his departure in order to balance our books. Well, no, we put the interests of the club first and didn't want to reinforce a direct rival. We made that decision knowing that we would be criticised for it.'

He added: 'I understand the positions of everyone, empathising is important. In the case of Leo, it is good to get angry because it is not good to accept defeat and we have all gotten angry.

'But there was a deadline for him to announce whether or not he was going unilaterally. He didn't and here it is. We all want him to retire at Barca.'

'The project is very interesting with young people and veterans, like Messi. And I think that, with him, we are going to win a title this season.'

Crunch talks over the presidents position were held on Monday as pressure grows on the under-fire chief to step down heightens.

However, Bartomeu admitted that he refused to resign, stating that it would not be 'appropriate' time to leave his post.

'There is no reason for me to resign,' he said in a press conference following the meeting. 'It's not an appropriate time to hand in my resignation. No one will be able to make the decisions if I decide to resign.

'The idea of stepping down has never crossed my mind. Never.'

Club members will vote on November 1 as to whether the president should be removed from his duty.

As it stands, 16,500 supporters have signed a motion to have Bartomeu removed from his position.

The vote will be held among 154,000 club members, with more than 66.6 per cent needed for Bartomeu to be ousted.