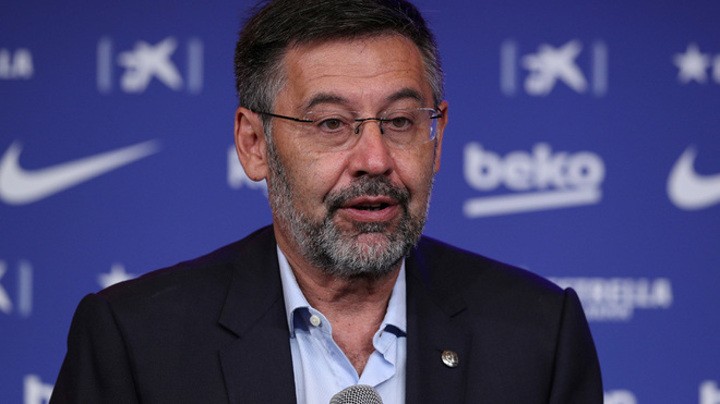 Following the validation of the votes needed to trigger a motion of no confidence against the Barcelona board, there were reports that Josep Maria Bartomeu could resign after Monday's board meeting.

However, the Barcelona president has stressed that stepping down has never been an option for him as he believes in the current project with Lionel Messi as its pillar and several prodigious players alongside him.

"It never crossed my mind to resign," Bartomeu told the press. "The project is very interesting with young players and experienced ones, like [Lionel] Messi.

"And I think that with him we are going to win a title this season. I understand everyone's opinions, as empathizing is important. In Leo's case is good to get angry because it is not good to accept defeats and we have all gotten angry.

"But there was a deadline for him to announce if he wanted to leave or not. He did not do it and he is still here. We all want him to retire at Barcelona."

Lionel Messi asked to be released during the summer after Barcelona's thrashing at the hands of Bayern Munich, and Bartomeu claims that he turned down the Argentine's request to avoid strengthening any direct opponents.

"Our priority was for [Lionel] Messi to be in the new project and I decided not to face a dialectical discussion. I was accused of forcing his departure to balance the accounts.

"Well no, we will not strengthen a direct rival. We made a decision accepting the attrition."

The referee's controversial decision to award Real Madrid a penalty kick in the derby against Barcelona on Saturday frustrated Ronald Koeman and Bartomeu has stressed that the VAR criteria should be made clearer for both everyone.

"[Barcelona's] board of directors reiterates its support for the VAR as a technological tool but understands that it has not been applied to essential levels of ethics and equity," Bartomeu noted. "Other teams have also talked in this regard. We ask the [Spanish Football Federation] RFEF for immediate reflection.

"Just now when I was coming into the press conference I was informed that there are audio recordings of a lineman talking with the referee in Barcelona's game against Real Madrid.

"We are going to analyse it. We have been requesting another verification of the VAR criteria for some time and we are calling for a joint reflection by the professional teams. As [Ronald] Koeman says, it cannot be one way in some games and in another way in others.

"The penalty the other day, which for some was one and others it wasn't, changed the flow of the game."

Barcelona have asked the Catalan government to offer them an extra 15 days to organise the referendum which is set to be held on the first two days of November. Bartmomeu believes that if they are not given sufficient time, the club will not be able to properly coordinate the process.

"If the vote of no confidence is made on November 1 and 2, it is impossible to do it in a decentralised manner," declared Bartomeu. "We do not have days to guarantee the logistics to vote in Catalonia and the rest of the region.

"We are not reckless, we want prepare the voting days on time. Tomorrow, Tuesday, there is another meeting to agree on the decentralised voting protocol. The Catalan government knew about the 15 days from the beginning."