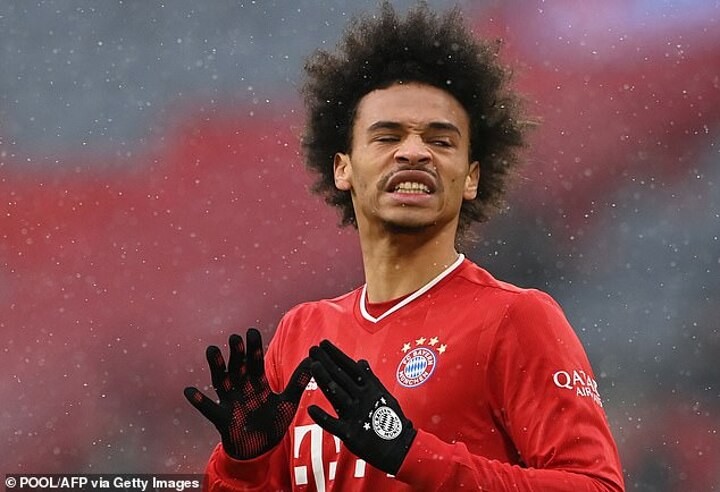 Bayern Munich chief executive Karl-Heinz Rummenigge has shut down speculation that they will sell Leroy Sane - just six months after his summer move from Manchester City.

The 25-year-old has only started seven Bundesliga matches this season since completing his £55m move after four seasons at the Etihad.

There has been some suggestion that Sane could be ditched after just one season at the club, as the winger has more often than not come off the bench.

Though as reported by the Manchester Evening News, Rummenigge has shut down any talk of the winger leaving the club.

The Bayern chief executive said: 'He has a five-year contract. That would be nonsense. We need this type of player.

'Of course he will stay with Bayern. And I am convinced: He will be a success here.'

Rumenigge previously said that he would 'kick the butt' of Sane to trigger improvement in his performance, after the winger was replaced after just 36 minutes of action against Bayer Leverkusen in December.

Sane was introduced in the 32nd minute for the injured Kingsley Coman during the game with with the champions 1-0 down, but after struggling to make an impact the 24-year-old was replaced in the 68th minute for England Under-21 international Jamal Musiala.

'Leroy was not happy [to be taken off], that's clear and understandable. God gave him incredible talents. I only believe one thing: he has not yet reached this FC Bayern gene,' Rummenigge told German station SPORT1.

'Like Thomas Muller, he was my hero. He has marched up and down, but not as protected by talent as Leroy. He has to work on that, that is his job.

'We have done everything we can to ensure that he comes to Bayern. We encourage every player, but we also challenge. He has to internalise that and the team supports him.'

Sane's career at the reigning Bundesliga and Champions League winners couldn't start any better, scoring two goals in an 8-0 victory over Schalke.

Since then though he has only started six games and has found the net just three more times.

When questioned on leaving Manchester City in the summer, Sane said: 'The concept and the plans of FC Bayern were the best match for my ideas. That’s why I came to my decision.

'The Bayern system really fits me perfectly. Wingers characterise Bayern’s game; that of course suits me very well. That was very much a key point for me.

“Of course I want to play, but I don’t demand to start every match. No player in the world can play every match and reach his highest level. I have my goals, but I’m zero-point-zero per cent against rotation.'