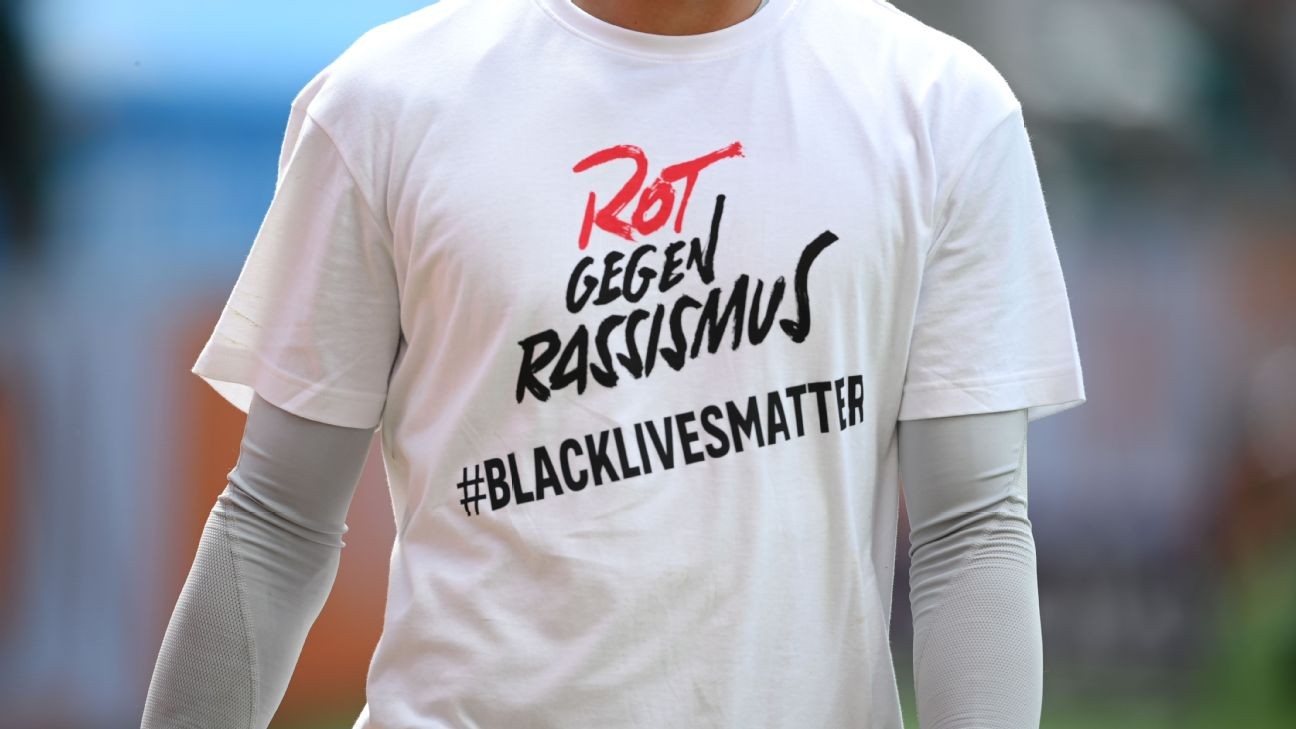 USMNT's Zack Steffen says support from around the world for the United States' racial issues is "motivating." Shaka Hislop praises Weston McKennie for emerging as a leader while football's governing bodies have stumbled. Rabbi Matondo praised Schalke teammate Weston McKennie and other players for their tributes to George Floyd.

Bayern Munich, Borussia Dortmund and Hertha Berlin showed their support for the "Black Lives Matter" movement in the Bundesliga at the weekend.

Bayern players also wore armbands during the match with "Black Lives Matter" printed on them.

Later on Saturday, Dortmund warmed up for their clash against Hertha with players wearing T-shirts that read "No Justice/No Peace" and "United Together."

Bayern Munich show their support of the Black Lives Matter movement before their game. pic.twitter.com/S5ourAkf8v

[email protected] came out with a strong message during warmups. pic.twitter.com/nyYorXo6Ku

Players and coaches from both Dortmund and Hertha then took a knee before kick-off and had a moment of silence.

The German football league (DFL) said earlier this week that they would not penalise players for sending their own tributes and messages after stars Marcus Thuram, Jadon Sancho, Achraf Hakimi and Weston McKennie showed their support for the movement last week. Elsewhere in the Bundesliga on Saturday, Mainz's Pierre Kunde took a knee after scoring in his side's 2-0 win at Eintracht Frankfurt.

McKennie donned an armband that read "Justice for George Floyd," while Thuram went to one knee after scoring the first of his two goals in Gladbach's 4-1 victory over Union Berlin.

Hakimi and Sancho both revealed yellow "Justice for George Floyd" T-shirts when they scored in Dortmund's win at Paderborn.

McKennie's United States teammates Zack Steffen and Tyler Adams, who also play in Germany, expressed their solidarity in the wake of Floyd's death.

Fortuna Dusseldorf goalkeeper Steffen issued a statement on Tuesday titled "Enough is enough" in which he said he was speaking in honour of "Floyd, Breonna Taylor, Ahmaud Arbery and every other African-American who has been killed by police brutality."

RB Leipzig's Adams posted a picture of the boots he wore in Monday's game at Cologne, showing he had "Black Lives Matter" written on his left shoe and "Justice 4 George" on the right.

"As an African-American who day in and day out is proud to represent America in the worlds game, I'm saddened and frustrated," Adams wrote. "Collectively our voices will bring justice for these crimes. Enough is enough. Black lives Matter. Black lives inspire. Justice for Floyd. Forever one nation, one team. On and off the field."