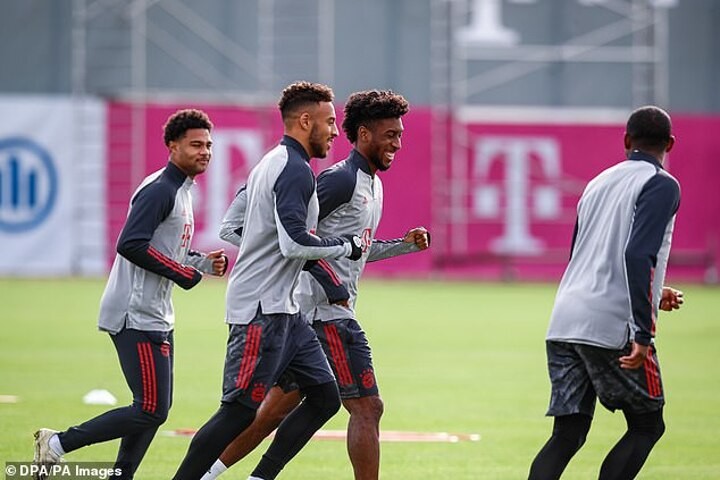 Bayern Munich fear more players could test positive for coronavirus after Serge Gnabry trained with his team-mates before he knew he was infected.

Bayern announced Gnabry would miss tonight's Champions League game with Atletico Madrid on Tuesday, but the winger did not receive his results before he had already trained that day.

As reported by Bild, Gnabry was pictured completing a contact stretching exercise with defender David Alaba as well as running alongside and competing against other members of the squad.

According to the report, 25 players took part in training but the strict hygiene rules mean the club are optimistic the game with Atletico will not be under threat.

UEFA rules state matches will be played if each team has at least 13 professionals (including at least one goalkeeper) available.

The report claims Bayern now want to test players even more closely. Each squad member will be tested on Wednesday before boarding the team bus to the stadium.

The Bundesliga side will begin the defence of their Champions League trophy at the Allianz Arena, two months after they beat Paris Saint-Germain in the final in Lisbon.

Following a surprise 4-1 defeat by Hoffenheim at the end of September, Bayern have won all of their last four fixtures.

Robert Lewandowski has been in phenomenal form once again with seven goals and three assists already.

Atletico go into the game unbeaten having won two and drawn two of their four LaLiga matches this season.