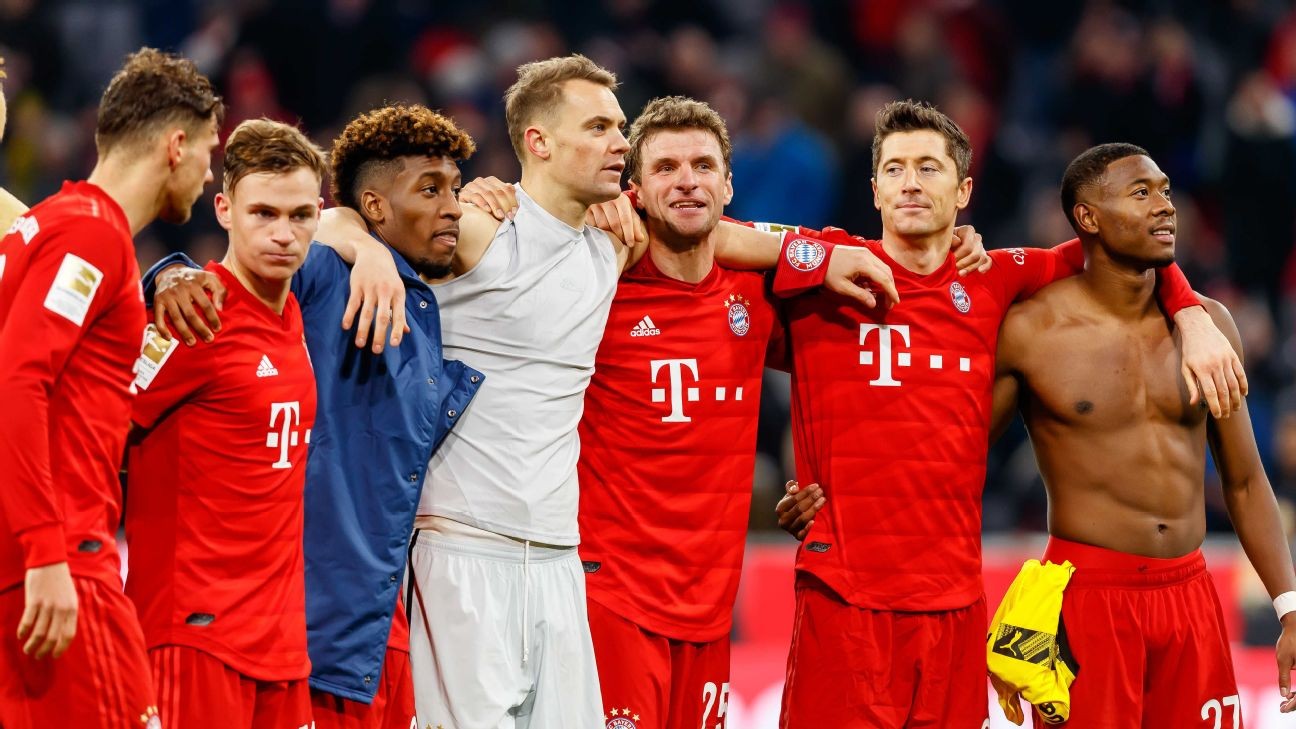 If there were a film to describe the course of the current Bundesliga season, it could well be "The Empire Strikes Back." Bayern Munich were meant to be in crisis, having sacked manager Niko Kovac in November after a series of disappointing results. Meanwhile, a trio of challengers waited to take advantage: RB Leipzig, catalysed by the brilliant Julian Nagelsmann, Lucien Favre's Borussia Dortmund and Borussia Monchengladbach, who are enjoying a thrilling campaign under Marco Rose. Yet as we enter the later stages of the campaign, Bayern stand at the top of the table.

In Spain, Real Madrid have pulled off a similar trick. At the start of the season, they too appeared to be an ailing empire. Their coach, Zinedine Zidane, faced accusations that he was merely suited to knockout tournaments, not the long haul. He had fallen out publicly with star Gareth Bale, making every effort to extract him from the club. His midfielders were experiencing an extended run of poor form, and his summer signings (Luka Jovic, Eden Hazard, Eder Militao) were falling flat. A few months later, Zidane's men lead La Liga, three points clear of Barcelona.

How have these teams done it?

Broadly speaking, there are three reasons: Football's major empires are wealthy, are ruthless and have been here before. Their institutional memory is one of victory. When Bayern were struggling, they were able to throw money at the problem. After the superb performances of Robert Lewandowski kept them competitive early in the season, summer additions Philippe Coutinho and Ivan Perisic have added much-needed quality and depth in attack.

Such are Madrid's financial resources that they were able to absorb the difficult teething period for Jovic, who has scored only twice since his €60 million transfer from Eintracht Frankfurt in the summer.

However, money is nothing without ruthlessness, and both Bayern and Real have an abundance of that. Bayern could not care less how they were perceived for sacking Kovac, the man who only a few months earlier delivered them a domestic league and cup double. Similarly, Madrid were not much bothered by the open warfare between Zidane and Bale; though the player has not featured much this season, there's no sign that he has significantly harmed their title ambitions.

In both cases, the clubs acted quickly to address the signs of off-field chaos. This is a lesson Manchester United and Barcelona, in persisting so long with their leaders at the managerial and boardroom level, have failed to heed. While United toil in contention for the Europa League, Barcelona are struggling to move on from the sluggish end to the Ernesto Valverde era, allowing Madrid to nose their way in front.

Last of all, there is the question of prior experience. Watching Real Madrid, who own the best defensive record in La Liga, there is a sense that they are playing from memory, that club greats such as Sergio Ramos, Luka Modric and Karim Benzema are going through the familiar motions of glory. They've won so many trophies that they know both how success works and how to pace themselves throughout a season.

With seasoned veterans such as Manuel Neuer, Robert Lewandowski, Thomas Muller and David Alaba, Bayern do not fold when times get tough.

In Germany, there is a comparable picture. Although Leipzig, Dortmund and Gladbach have produced some of the season's most exhilarating results in isolation, Bayern still hold a considerable advantage: namely, that several members of their side have won at least five consecutive league titles with them, and five (Manuel Neuer, Thomas Muller, Jerome Boateng, Javi Martinez and David Alaba) have won the past seven.

The coach in Spain or Germany who seems most aware of the scale of the challenge is Leipzig's Nagelsmann, a manager whose own club, it must be said, is not exactly short of money. In a surprisingly combative recent address to his players, following a startling 2-0 defeat at Eintracht Frankfurt, he said, "We need to decide whether or not we push towards the title or whether we stay here, have something to eat and drink, and fall back into the pack."

Nagelsmann believed that his players, none of whom have won the Bundesliga, were merely happy to be at the top of the league, therefore suffering from a sort of altitude excitement. His words seemed harsh at the time, but results since then have stood them in decent stead. Draws against Gladbach and Bayern mean that the only game left against their closest challengers is at home to Borussia Dortmund, whose defence has been inconsistent of late and whose injuries, most notably to Marco Reus and Julian Brandt, have come at precisely the wrong time. Although Leipzig could and should have beaten Bayern, following startling misses from Timo Werner and Marcel Sabitzer, they remain just one point off the top after Sunday's 0-0 draw.

Perhaps Nagelsmann has decided that in order to break a club's reign, you need to be even more brutal than they are. A complaint levelled at Dortmund last season, most devastatingly by former Bayern striker Sandro Wagner, was that they were far from the supreme outfit everyone else in Germany thought. By contrast, Leipzig have shown of late that they have the resilience -- and, just maybe, the ruthlessness -- to resist one of football's proudest empires, for a season at least.