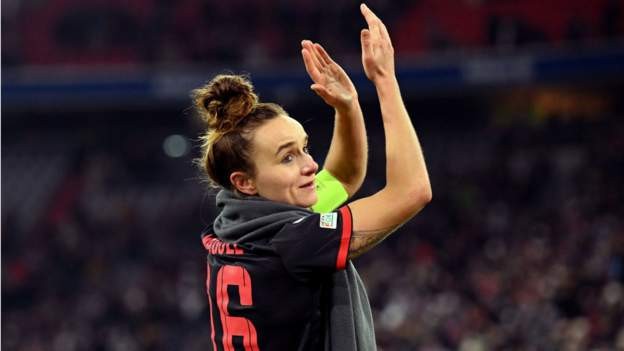 Bayern Munich stunned Barcelona in the women's Champions League to earn their first win over the Spanish side.

In front of a women's club record crowd of 24,000 at Allianz Arena, Bayern went 2-0 up after 10 minutes through goals by Klara Buhl and Lina Magull.

Barcelona, featuring England's Lucy Bronze and Keira Walsh, had no answer to the Germans, driven from midfield by fellow Lioness Georgia Stanway.

Lea Schuller made it 3-0 on the hour before Geyse scored a consolation.

The result leaves Bayern and Barcelona level on nine points at the top of Group D after four matches, although the Spanish side remain ahead on goal difference.

Bayern had not scored in three previous games against Barca, but were two goals ahead early on when Buhl slotted in from a Sydney Lohmann cross before Magull converted Schuller's cut-back.

The roles were reversed in the second half, Magull hanging in a deep cross for Schuller to get herself on the scoresheet with a back-post header for her 14th goal in 10 games in all competitions this season.

Bayern goalkeeper Maria Luisa Grohs made a terrible mistake on 65 minutes, dawdling on the ball and allowing Geyse to dispossess her and score, but the hosts held on for a famous win.

How to win the World Cup: No live games today? No problem! Watch this instead on BBC iPlayerA dead oil magnet and a trainee detective: Watch the gripping drama, Granite Harbour, set in Aberdeen