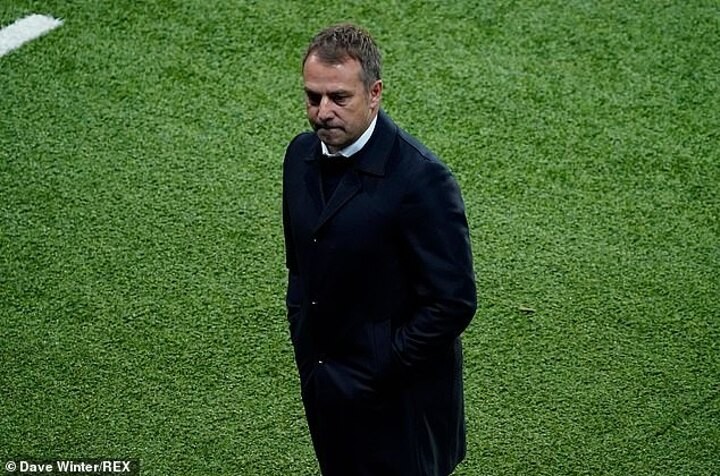 Hansi Flick has hinted that he wants to leave Bayern Munich this summer in order to succeed Joachim Low as Germany manager.

The Bayern boss remained coy over his future after he watched his side get dumped out of the Champions League quarter-finals by Paris Saint-Germain on Tuesday evening.

The 56-year-old has been linked with the Germany role ever since Joachim Low announced last month that he will be standing down after the Euros this summer and talk over his future at Bayern intensified after their European exit in Paris.

When asked about his future, Flick told Sky Germany: 'I have a contract with FC Bayern, but I always think about what's going to happen or how things will continue, whether everything is going well here and so on.

'My family is behind me, no matter what my decision is, whether it is at the DFB.'

Flick added: 'My relationship with Salihamidzic is stable. Nothing will change that. He has his job, I have mine. I will keep doing as I have done all season, which is why everything is stable.'

Flick has credit with the German giants after masterminding their treble-winning campaign last season which saw them lift the Champions League trophy last August.

However, the Bayern boss was dismissive of talks that he had a meeting with the club as a result of their Champions League exit.

'I don't have an appointment with the Bayern board,' Flick added. 'If Oliver (Kahn) wants to talk to me then he can gladly do it. I don't know what he will want to talk about.'

Bayern legend Lothar Matthaus told Sky Germany after the second leg in Paris that he believed it was Flick's last European game in charge of the club and that he will be taking over from Low this summer.

Matthaus said: 'That was Hansi Flick's last Champions League game as coach of Bayern. He is first choice at the DFB to succeed Joachim Low. He will accept the offer in the summer.'

Bayern were dumped out on the away goals rule after PSG had edged a thrilling first-leg clash 3-2 in Munich, which proved decisive after Bayern could only secure a 1-0 win at the Parc des Princes on Tuesday night.

Flick accepted his side had come up short, particularly in attack, and were left to count the cost of shortcomings from the first leg.

'Normally my team has so much quality in the final third, but today they were lacking that final punch,' Flick said in an interview with Sky Germany.

'We have to accept that, even though we would have like a different outcome.

'Given the first leg, with all our chances and the ones we gave away, without the third goal, we would be through.

'You saw how dangerous they are in attack. As a fair loser, I would like to congratulate them.'