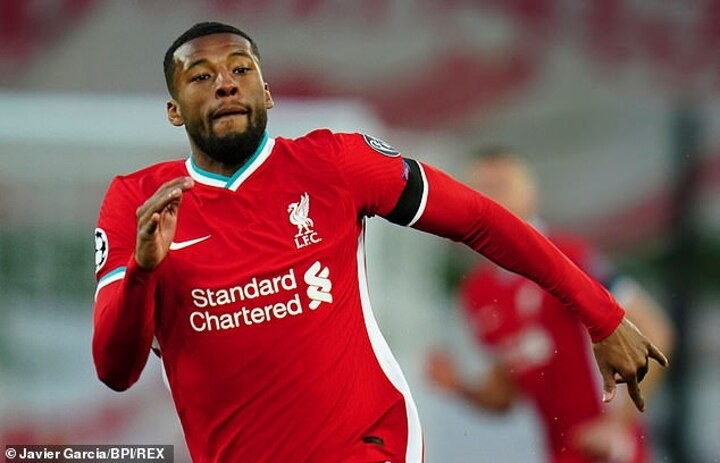 Bayern Munich have been openly invited to make a bid for Liverpool midfielder Georginio Wijnaldum in an extraordinary move by the player's agent.

Wijnaldum is out of contract with the Reds in the summer and question marks over his future have dogged both player and club for several months.

Now, his agent Humphry Nijman has revealed that the Dutchman is mulling over his choices.

'Wijnaldum is a free transfer and keeps all options open,' Nijman told Sport1.

The statement suggests that Wijnaldum could agree a new deal with Liverpool at the end of the season, but given the matter has been unresolved for so long it seems unlikely.

However, Nijman then took the incredible step of asking Bundesliga giants Bayern Munich to make contact with him over a possible move for Wijnaldum.

'FC Bayern is a great club,' the agent said. 'If you are interested in him, please feel free to speak to us.'

Nijman pointedly highlighted that Wijnaldum would leave Liverpool on a free transfer this summer, enhancing his attractiveness to potential buyers in a year of financial ruin because of the coronavirus pandemic.

Wijnaldum has been a key players again for Liverpool this season, with Jurgen Klopp having to play several other midfielders out of position to accommodate the Reds' numerous injuries.

The 30-year-old has made 33 Premier League appearances, scoring just two goals and no providing no assists across any competition so far this season.

A move to Bayern could have an agreeable symmetry, as Liverpool signed Thiago from the German champions and he was widely touted as Wijnaldum's replacement in Klopp's starting eleven when he arrived.