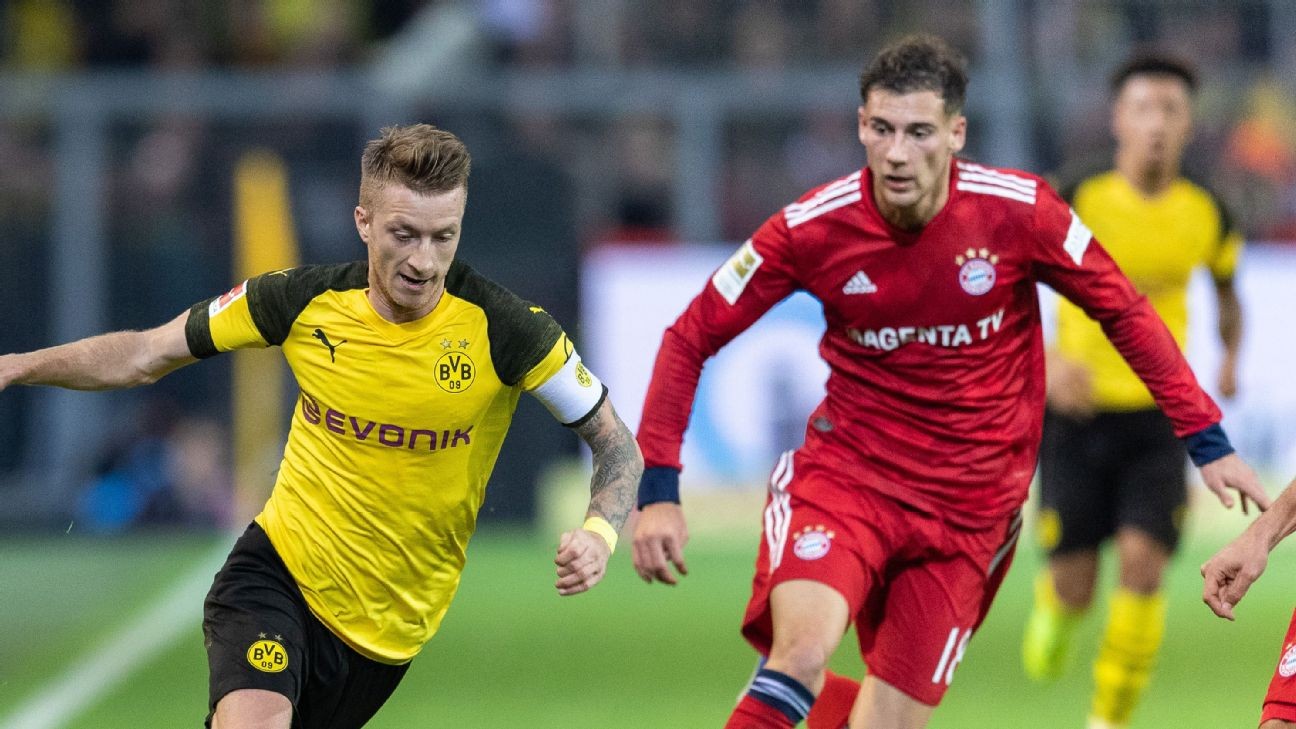 Bundesliga leaders Borussia Dortmund take on six-time defending champions Bayern Munich at the Allianz Arena on Saturday evening in the most exciting football game of the weekend, anywhere. Millions of supporters in Germany and beyond will nervously watch as the two biggest teams in the country, separated by only two points in the table with seven games to go, clash in an epic showdown that might well decide the closest Bundesliga title race this decade.

So this match is important?

Yes! It's not an exaggeration to state that Bayern and Dortmund, the two clubs that have won the last nine German championships between them, haven't met in a more meaningful game since contesting the 2013 Champions League final at Wembley, which Bayern won 2-1. They have twice contested the DFB Pokal final, Germany's second-most coveted competition since -- Bayern winning in both 2014 and 2016 under Pep Guardiola -- but the league is a much greater prize.

At the beginning of the season, most people expected Niko Kovac's Reds to continue their domestic dominance after winning six consecutive league titles. But some indifferent results, coupled with remarkable consistency from a youthful BVB side, have given the Westphalians a real shot at winning their first Meisterschale (championship bowl) since Jurgen Klopp led them to a famous double in 2012. Lucien Favre's men won this season's first meeting, a breathless end-to-end extravaganza, 3-2 in the Signal Iduna Park. A second win and season sweep would open up a five-point gap in the table in their favour.

In other words: the onus is very much on Bayern

Indeed it is, and in more ways than one. The Bundesliga's wealthiest club have almost taken the league for granted in recent years; their main aim being the Champions League, a trophy they have lifted five times.. But after being eliminated from Europe's prime club competition at the last-16 stage by Liverpool, defending their national title has taken on extra significance, especially for under-fire rookie manager Kovac, who is in danger of becoming the first full-time Bayern boss since Jurgen Klinsmann (2008-09) to be shut out on silverware in a season. Anything but a win would really ramp up the pressure on the 47-year-old.

Borussia Dortmund vs. Bayern Munich is always Germany's biggest game but this year has added significance given the Bundesliga title race.

His opposite number Favre, by contrast, travels to Munich in a position of real strength. His Black and Yellows will be more than happy with a draw and would still be in it even if they lost. No one in the club would criticise the Swiss tactician, 61, if Bayern were to ultimately pip them to the title, either. Favre has already exceeded expectations by making a squad packed with up-and-coming but inexperienced players like England's Jadon Sancho (19) truly competitive with finely constructed, systematic attacking play.

Who has the advantage?

Well, Bayern are very strong at home. They have won their last seven league games at the Allianz and Dortmund were beaten 6-0, 4-1 and 5-1 on their last three visits there. In Robert Lewandowski, the ex-BVB striker, the record champions also have a key player who relishes playing against his former team: the Polish centre-forward has scored 12 times in nine league meetings. On Wednesday night, Lewandowski again underlined his importance with two goals as a substitute in 10-man Bayern's 5-4 DFB Pokal quarterfinal win against second-division Heidenheim.

So Bayern will win?

Not too hasty. Bayern have often looked a little leggy and devoid of inspiration this season, and it's been noticeable that Bayern are winless infive games against top opposition so far: two draws against Ajax in the Champions League, one draw and one defeat against Liverpool in the same competition and the league defeat at Dortmund in November. Teams adept at breaking from midfield with fast counterattacks have been a particular problem for Kovac's men who, for all their star quality, lack cohesion and tactical sophistication, as the chaotic Heidenheim game proved once more.

Dortmund have had problems of their own, namely with individual mistakes by an immature and depleted defence. But if they can disrupt Bayern's supply lines in midfield and expose their back four in transition, a chance to administer a knockout blow will surely arise. Watch out for the silky, intelligent moves of Dortmund captain Marco Reus, in particular. Either way, it promises to be a glorious, utterly compelling encounter between two sides whose strengths and weakness correspond so perfectly that lots of goals are almost inevitable. "It's the greatest game of the season, all of Germany can't wait for it," Munich midfielder Leon Goretzka said this week. And he's absolutely right.