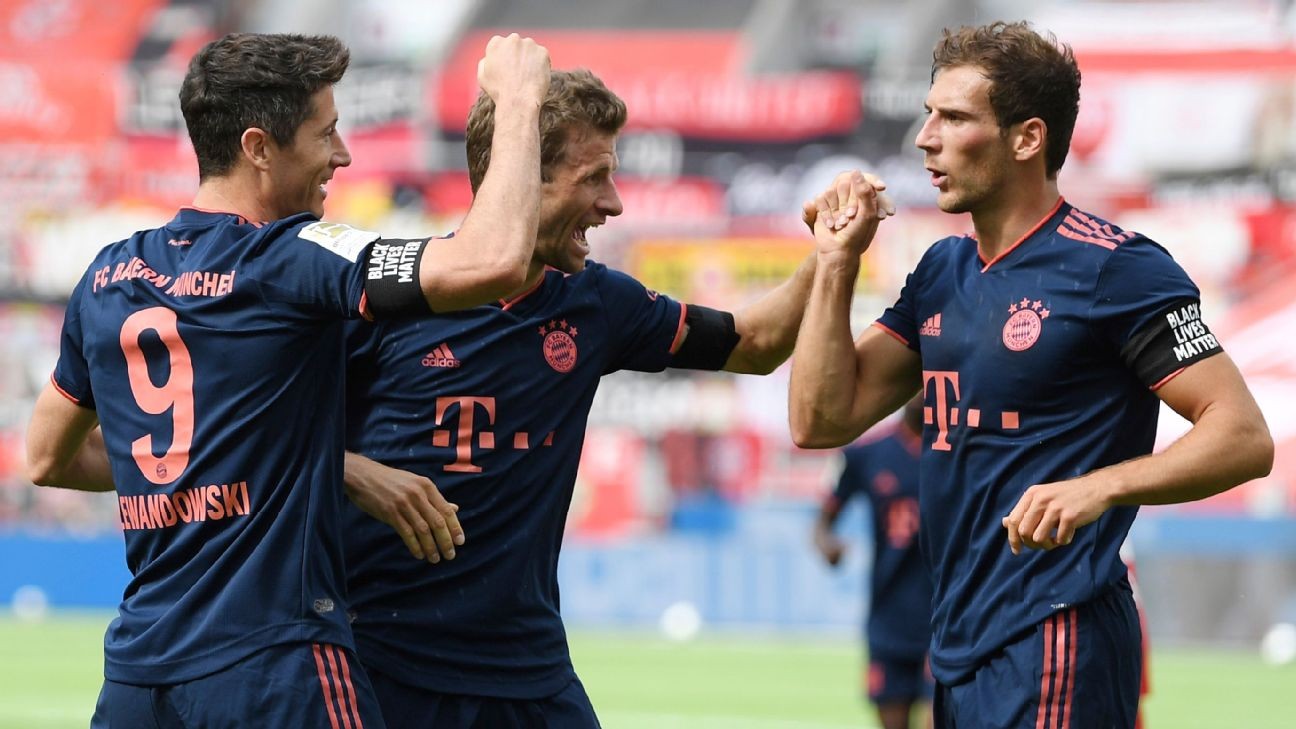 Frank Leboeuf says Bayern Munich are so good he can't believe that haven't won the league already. Craig Burley lauds Liverpool's decision to not sign Timo Werner, saying it was a "smart" business move. As RB Leipzig's Timo Werner prepares for a big summer move, look back at some of his goals for Germany.

Bayern Munich romped to a 4-2 win at Bayer Leverkusen on Saturday, but Bayern dominance is not news at this point. The two biggest stories happened before the game kicked off.

First, Leverkusen put out a lineup that did not include star striker Kai Havertz; the subject of countless transfer rumors at the moment, Havertz was held out due to a slight muscle injury. Also, in warm-ups, Bayern donned shirts that read "Rot Gegen Rassismus" ("Red against Racism") and featured the Black Lives Matter hashtag. They also wore "Black Lives Matter" armbands.

- Stream ESPN FC Daily on ESPN+ (U.S. only)
- Ogden: Why Werner's move to Chelsea is a warning to Liverpool
- Insiders' Notebook: Fans cash-in on Bundesliga return

Despite Havertz's absence, Leverkusen took an early lead via Lucas Alario's unexpected fast-break strike. But as tends to be the case, the champs responded with malice. Three Bayern goals in the final 18 minutes of the first half (including one scored and one assisted by man-of-the-match Leon Goretzka) put the match away. Leverkusen earned slight consolation when 17-year-old Florian Wirtz scored his first career goal, becoming the youngest-ever goal scorer in Bundesliga history, curling a lovely strike past Manuel Neuer in the 89th minute.

Bayern haven't lost since Dec. 7. They've enjoyed 15 wins and one draw in their past 16 league matches, and they've won pairs of matches in the Champions League and DFB-Pokal as well. They host Eintracht Frankfurt on Wednesday in the Pokal semifinals (2:30 p.m. ET, stream live on ESPN), and depending on other results, they could clinch their eighth straight title either at home against Borussia Monchengladbach next weekend or three days later at Werder Bremen.

A loss was expected for Leverkusen, who remain in fifth place in the table. But in addition to a DFB-Pokal semifinal of their own against Saarbrucken on Tuesday (2:30 p.m. ET, stream live on ESPN), Leverkusen have a chance to move up in the Bundesliga, facing Schalke 04 while fourth-place Gladbach face Bayern. With Bayern having pulled away, the fight for fourth place might be the most interesting remaining battle in the league. -- Bill Connelly

Here's what else we learned from the weekend's Bundesliga action.

Dortmund need a deputy for Haaland

Top of the targets list for Borussia Dortmund's sporting director Michael Zorc needs to be a backup striker for Erling Haaland. Haaland has missed the past two matches, and while stats and numbers say different -- scoring six against Paderborn last weekend is hardly a bad day at the office -- Dortmund lack a clinical, cutting edge up front without Haaland, who was injured against Bayern Munich. Instead, they wear the other team down, keep passing the ball and then wait for openings in their 3-4-3 formation that lacks that arrow point up front.

Dortmund are by far and away Germany's next best team to Bayern Munich, and it took a brilliant goal to break down Hertha Berlin's resolute defence. It was the best move of the match as the outstanding Jadon Sancho chipped the ball in to Julian Brandt, who nodded it down to Emre Can, who steered it into the bottom corner from the edge of the box. Simple, but also wonderfully effective.

Despite a focal point for the attack, Borussia Dortmund eked out a win over Hertha Berlin.

Hertha, in turn, offered very little going forward and barely troubled Roman Burki's goal, so it was effectively Dortmund's press against an ever-retreating Hertha. Sancho could have come away with a brace -- he missed from close range early in the second half and then had an effort well saved by Rune Jarstein's feet later on -- but they needed that Haaland-type figure to continue drawing defenders away and giving the likes of Sancho, Brandt (who struggled out of position as a makeshift No. 9) and Thorgan Hazard more space.

This was another impressive performance from Dortmund against a Hertha team suffering their first defeat since the league was postponed due to COVID-19, but to push Bayern even closer next season. they need an able deputy for Haaland. -- Tom Hamilton

RB Leipzig should never have drawn this match 1-1 against basement side Paderborn. With all attention on Chelsea-bound Timo Werner, it was one of his much-coveted teammates who took the headlines after Dayot Upamecano was shown a second yellow card for kicking the ball away in frustration just before the break. It left Leipzig resorting to purely counter-attacking in the second half while Paderborn hammered away at their goal, and eventually they broke through in the 91st minute through captain Christian Strohdiek, who smashed the ball home from close range.

When Patrik Schick scored after 27 minutes -- a first-time finish after Werner teed him up -- it should have been a procession for Leipzig. They were all over Paderborn, but then Upamecano's red card saw them replace Schick at the break with defender Marcel Halstenberg. Leipzig were hemmed back in their own half, and Paderborn eventually broke down Leipzig's resolute defence and the calm Peter Gulacsi late on. This was two points dropped for Leipzig, and it could prove crucial in the remaining chase for Champions League spots.

It should have been the sort of match in which Werner put on his own one-man show in front of goal, but instead was left a frustrated figure. He was Leipzig's main attacking outlet, but he looks far more comfortable playing off the shoulder of another, more physical striker. His well-timed runs were again a threat, as he cuts in off the wing and puts defenders on their heels. But without Schick as a running mate in the second half, he looked isolated, as more often than not he was left as a lone striker with teammates failing to offer the necessary support. He had good chances in either half, but had an effort blocked in the first half and then fired over late in the second. The latter would prove to be a crucial miss as Paderborn got their just desserts late on.

In their three matches at the comforts of Red Bull Arena since the Bundesliga's return to action, Leipzig have drawn all three. -- Tom Hamilton

A quiet Saturday for the Bundesliga's Americans

Perhaps the most notable performance was from 30-year old Morales, who made his 28th appearance of the season for Fortuna and, in 24 minutes against Hoffenheim, completed 18 of 22 passes (including three of five into the attacking third), made four ball recoveries, created one chance and won five of seven aerial duels.

Morales has played 17 times for the U.S. men's national team, most recently with a pair of 21-minute performances against Canada and Cuba in the CONCACAF Nations League last fall.

In a dogfight for a Champions League spot, Borussia Monchengladbach suffered a disappointing 1-0 loss at SC Freiburg on Friday evening. Coming off of a dominant 4-1 win over Union Berlin, Gladbach controlled the first 30 minutes of the match with 70% possession and a 1.3 to 0.2 expected goals (XG) advantage. But their finishing was tame, and they ran out of incisive questions to ask in the second half, and Freiburg substitute Nils Petersen scored with his first touch, a set-piece header in the 58th minute. Gladbach's Alassane Plea picked up a second yellow card 10 minutes later, and the visiting team couldn't muster a shot on goal from that point forward.

The result increased both teams' odds of playing in the Europa League next season. For Gladbach, it meant remaining tied at 56 points with fifth-place Bayer Leverkusen with a visit to Bayern Munich on deck. If Leverkusen pick up points from free-falling Schalke next week, BMG will be your most likely fifth-place finisher in a league that sends only four to the Champions League.

Meanwhile, with their first win since play resumed three weeks ago, Freiburg climbed fully back into the race for sixth place and the second guaranteed Europa League spot. (The seventh-place team could also get into Europa depending on how the DFB-Pokal plays out.) -- Bill Connelly

Dusseldorf cannot hang on to a lead -- again

Relegation-threatened Fortuna Dusseldorf blew yet another lead as they were held to a wild 2-2 draw at home by Hoffenheim. It was the latest implosion by Dusseldorf, who wasted a two-goal lead at Cologne on matchday 27, having squandered a 3-0 advantage against Hertha Berlin prior to the coronavirus pandemic-induced break.

Despite their numerical disadvantage, Hoffenheim pushed forward and Steven Zuber's finish from 16 metres, just past the hour mark, made it 2-1. With 15th-placed Mainz on the way to victory at Frankfurt, Rosler substituted four players in at the same time -- U.S. international Alfredo Morales among them --- and Hennings converted a penalty to save a point that keeps Fortuna in the relegation playoff place with four games left. -- Stephan Uersfeld