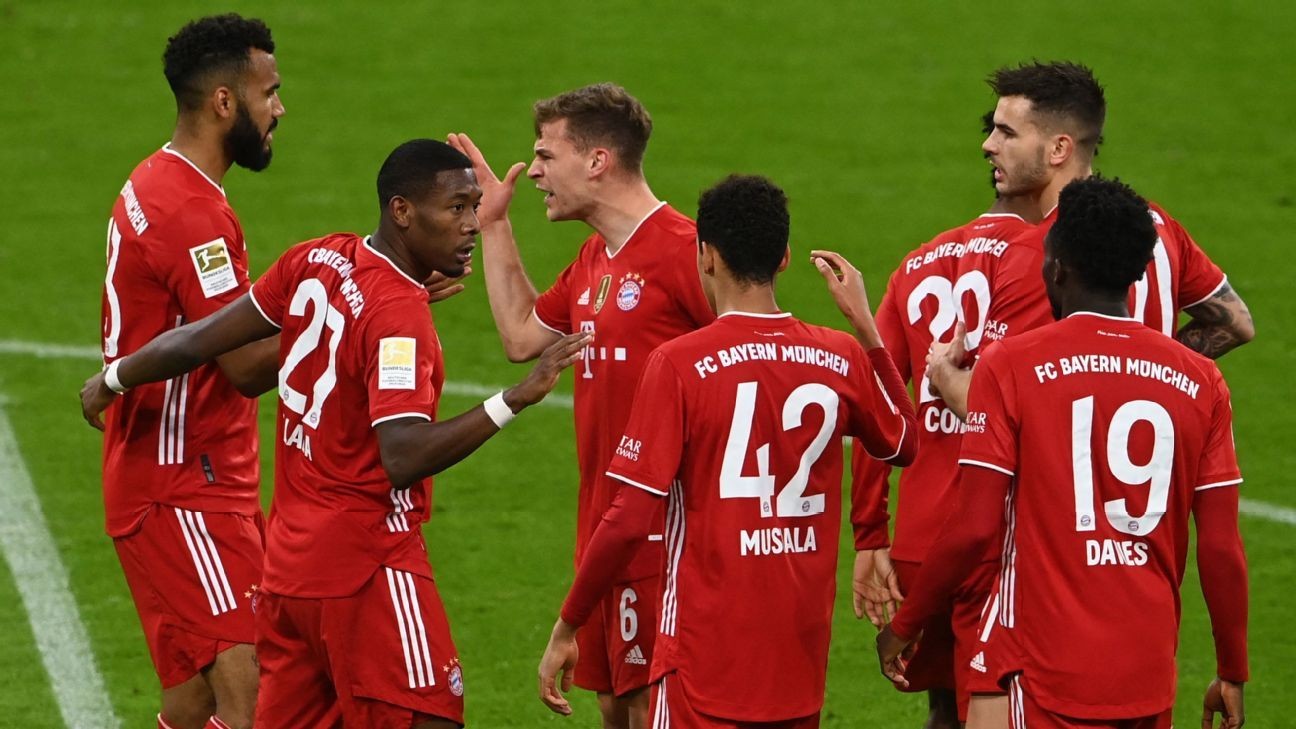 Bayern Munich have won their ninth consecutive Bundesliga title thanks to RB Leipzig's 3-2 defeat to Borusia Dortmund on Saturday which came before Hansi Flick's side kicked off their match with Borussia Monchengladbach.

The Bavarians could have clinched the championship crown two weeks ago, but fell to a shock 2-1 defeat at Mainz. Leipzig's subsequent victory over Stuttgart kept the title race alive through the break for the DFB Pokal semifinals. But their loss in Dortmund makes Bayern national champions for the 31st time, with 30 coming in the Bundesliga era.

Jadon Sancho scored in the final minutes of the match to seal victory for Dortmund, and spark celebrations in Bavaria.

Nine Bundesliga titles in succession extends Bayern's own record, with no one else -- including the Munich giants -- having won more than three in a row prior to this run.

The 2020-21 campaign also marks the end of an era at the Allianz Arena as David Alaba, Jerome Boateng and Javi Martinez are set to leave this summer.

Bayern manager Flick will also leave the club after just over 18 months where he won seven trophies and became only the second coach after Pep Guardiola at Barcelona in 2009 to win six trophies in a single calendar year. Flick has been linked with the managerial role at Germany, where he could take over from Joachim Low after this summer's European Championship. Flick will be replaced as Bayern manager by Julian Nagelsmann, who will leave Leipzig at the end of the season.

They kicked off this season the with an 8-0 win over Schalke, Bayern led for most of the season and have been in first place since a 2-1 away win at Bayer Leverkusen in December when striker Robert Lewandowski scored a brace including a stoppage time winner.

Bayern never looked back as they picked up key wins in the latter stages of the season. Against Dortmund in early March they turned an early 2-0 deficit into a 4-2 win, and a month on they won 1-0 away at Leipzig, who had been threatening a title challenge.

Chief Executive Officer Karl-Heinz Rummenigge is also set to vacate his position in December 2021. Rummenigge will leave after 30 years at the club, with 20 of those as the CEO. Former Germany and Bayern captain Oliver Kahn is set to take over in the front office.

Boateng, Alaba and Martinez have each enjoyed two Treble successes at the club, having been with Bayern when they achieved the same feat in 2013.

The rift between Flick, who succeeded Niko Kovac in November 2019, and sporting executive Hasan Salihamidzic overshadowed a large part of 2021. The pair fell out over the club's transfer strategy and Flick in mid-April confirmed he believed his time at Bayern is coming to an end despite having a contract until 2023.

The decision has yet to be approved by the club, which has voiced its frustration after Flick made his position known following a 3-2 win at Wolfsburg.

With Bayern out of the Pokal and the Champions League, they have now set their sights on helping attacker Lewandowski to the all-time record of goals scored in a single season. That record is held by Gerd Muller, who scored 40 goals in the 1971-1972 season.

Lewandowski now has 36 goals after his consolation strike in the defeat to Mainz and needs five more from the final five matches of the campaign to break Muller's record.

The 32-year-old Poland striker this season rose to second in the all-time Bundesliga scorer list and is on 272 goals but remains well behind Muller, who scored 365 times for Bayern..