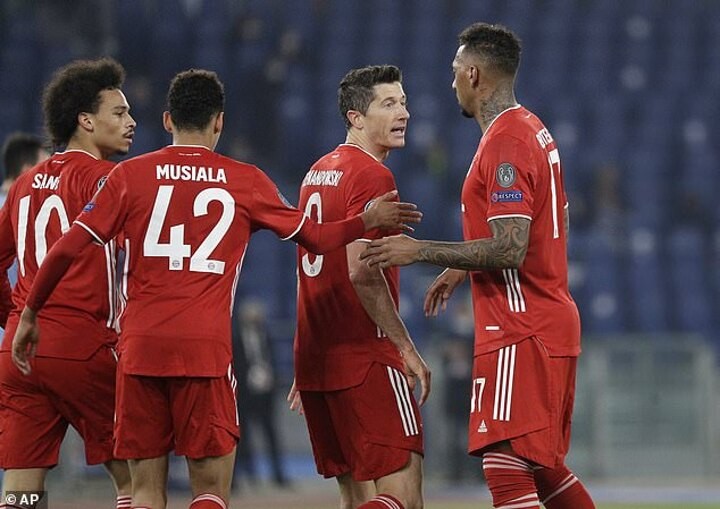 Rome has fallen and Europe could soon be conquered. Again.

There was something ominous about the way Bayern Munich steamrollered Lazio in their own backyard to plant one foot firmly in the quarter-finals.

The Italian pretenders to Bayern's crown came into the battle with inferior weapons but decided to stab themselves three times anyway. Brainless mistakes led to Bayern's first and third goals, while their fourth was the gift of an own goal.

It left the second leg in Munich on March 17 little more than a formality and the most frightening thing for Bayern's rivals is they achieved such a decisive scoreline in the absence of several key players.

Serge Gnabry, Douglas Costa and Corentin Tolisso were out through injury, while Thomas Muller and Benjamin Pavard tested positive for Covid-19. They were so short, Bayern only named six of an allocated 12 on their bench.

Yet even without these regulars the reigning European champions outclassed a Lazio side who dipped their toe in the water of the knockout stages for the first time in 21 years and promptly had their foot bitten off.

It was a 17th victory in 18 Champions League outings for Hansi Flick's team on a night of satisfying landmarks that showed the present and the future of the team is secure.

The irrepressible Robert Lewandowski moved ahead of Raul as the tournament's third-highest goalscorer, notching his 72nd when he seized upon a sloppy Mateo Musacchio backpass in the ninth-minute.

Only the legends Cristiano Ronaldo (134) and Lionel Messi (119) remain above the Pole though, at 32, he'll have to go some from here to overtake them.

Incredibly, he now has 32 goals in 31 matches across all competitions this season off the back of consecutive seasons that have seen him net 42, 43, 41, 40 and 55 times.

And 17-year-old Jamal Musiala became the youngest English goalscorer in the Champions League when he swept home Bayern's second, offering further evidence they have unearthed another gem.

England's loss will surely be Germany's gain at international level, however, with Stuttgart-born Musiala opting to play for the country of his birth rather than the nation he has represented at four youth levels.

With their abundant firepower, knockout stage know-how and remarkable strength in depth across the field, it is difficult to look beyond Bayern retaining their title.

Pep Guardiola's Manchester City will, of course, have something to say about that and a similarly dominant performance when they face Borussia Monchengladbach in Budapest on Wednesday may change a few minds.

Likewise, Paris Saint-Germain, who destroyed Barcelona 4-1 in the Nou Camp last week, will feel this could be their time.

But as Barca and Real Madrid step aside, Bayern remain the last bastion of European football's old order determined not to be beaten by the new money.

It isn't that long ago, remember, that Bayern edged out PSG to claim the trophy in Lisbon and you imagine they would back themselves to get the better of both the Parisians and City whether over two legs or a one-off final.

By extension, the same applies to Liverpool, Chelsea or anyone else with the misfortune to be paired with them from here.

Nobody is pretending that everything is hunky-dory at Bayern. They have been unable to establish the kind of commanding lead at the top of the Bundesliga that has in previous years enabled them to concentrate exclusively on European ambitions in the Spring.

Having been held 3-3 at home by Arminia Bielefeld and then beaten 2-1 at Eintracht Frankfurt in their last two domestic outings, Bayern sit just two points ahead of RB Leipzig.

Julian Nagelsmann's team are 2-0 down to Liverpool and likely to crash out of Europe, enabling them to focus on becoming the first rival to deny Bayern the Meisterschale since Jurgen Klopp's Borussia Dortmund in 2012.

And the intensity of Bayern's fixture list was always likely to catch up with them in terms of injuries and fatigue after the shortest of pre-season turnarounds last summer, a truncated winter break and this month's detour to Qatar for their FIFA Club World Cup triumph.

Which made their ruthless win away to Lazio all the more impressive - a true statement of their intent.

While Lazio were largely architects of their own downfall, the way Bayern took command of the tie was that of a team that means business.

Coman pounced on a mistake to storm clear in the lead-up to Sane's tap-in for the third and it was Sane's cross that Francesco Acerbi turned into his own net for the fourth after Coman had spotted his forward run.

Their back line, which has looked like an achilles heel at times this season, wasn't unduly tested by the Italian side.

While Bayern have scored far and away the most goals in the Bundesliga, they have also let in 31 in 22 games, just one shy of their goals against column in 34 games last season.

It may well be the case later in the competition that they will need to score two or three goals in each match to compensate but that wasn't an issue in the Stadio Olimpico.

Bayern are a brooding presence in the Champions League draw once again. Europe beware.