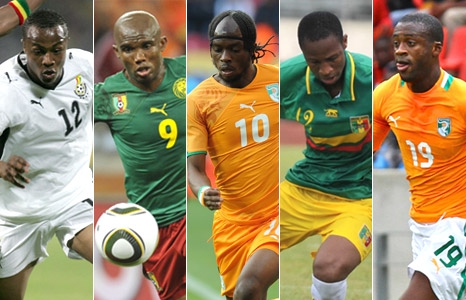 The 2011 BBC African Footballer of the Year will be unveiled later.

The winner will be named on the BBC's Sport Today programme at 1630 GMT and here on this website.

Yaya Toure and Gervinho of Ivory Coast, plus Andre 'Dede' Ayew of Ghana, Cameroonian Samuel Eto'o and Mali's Seydou Keita are in contention.

Football fans across Africa and around the world voted for their top contender, from a shortlist drawn up by experts from across the continent.

Both Manchester City midfielder Toure and Arsenal midfielder Gervinho starred for Ivory Coast as they qualified for the 2012 Africa Cup of Nations by winning all their matches.

Toure scored the winner for Manchester City as they won the FA Cup while Gervinho was instrumental in Lille's double in France before he moved to Arsenal.

Ayew, who is one of Ghana's key players, helped Marseille to win the French League Cup and Super Cup while Mali's Seydou Keita was part of Barcelona's historic Champions League winning team.

Eto'o netted 21 goals for Italian side Inter Milan before leaving for Russian Anzhi Makhachkala in August and has scored seven goals in eight matches so far this season.

The shortlist was determined by a panel of experts across Africa who took into consideration individual skill, technical ability, teamwork, consistency, impact on results and fair play.

"This shortlist reinforces the importance of African footballers to Europe's top clubs. It will be intriguing to see who triumphs in the end," the BBC's African Football blogger Piers Edwards said.

Previous winners of BBC African Footballer of the Year award: