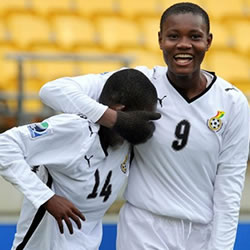 Bechem United President Owusu Achiaw has offered to foot the camping bills of the national womens U-20 team.

The Black Princesses and all other national teams camping at the Ghanaman Soccer School of Excellence in Prampram were sent home for lack of finances to foot their quite exorbitant bills.

The Princesses who were camping for their World Cup campaign in August were said to be camping at a cost of Ghc 6000 monthly -an amount that proved too much for the Ghana FA to sustain in the absence of government's assistance.

Achiaw thus with his real estate companyÂ Top Kings have decided to step in with the needed financial support to help the team prepare adequately for the World Cup in Japan.

"We heard there were some challenges facing the team's camping in Prampram," he told GHANAsoccernet.com.

"We have therefore decided to step in and help save the Princesses preparations for the World Cup.

"We believe the team can do well to make the nation proud and therefore our determination to support them in our small way to motivate them deliver."

Top Kings last year donated an amount of Ghc 25000 to the national volleyball team during a time they were also facing some financial challenges.