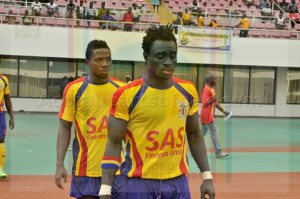 Hearts of Oak outcast Kwaku Andoh, is on the verge of securing a two-year deal with Bechem-based Premier League side, Bechem United, Ghanasoccernet.com understands.

Sources close to the Bechem-based Premier League side have disclosed to Ghanasoccernet.com that the player is under close monitoring even though he has expressed interest in playing outside the country.

Andoh was declared surplus to requirement by the Phobians last week for non-performance since joining the Accra giants two seasons ago from Heart of Lions.

The workaholic defender is quoted to have said that his only aim is to get a foreign club but amidst those reports Bechem United have expressed interest in Kwaku Andoh.

“He is an experience defender, because he has played for clubs like Berekum Chelsea, Heart of Lions and Hearts of Oak."

“We think adding him to our squad will do us a lot of good so we have expressed interest in him despite saying he wants to move to a foreign club."

"We are not bothered about it because we hope that we will definitely land him,” the sources revealed.