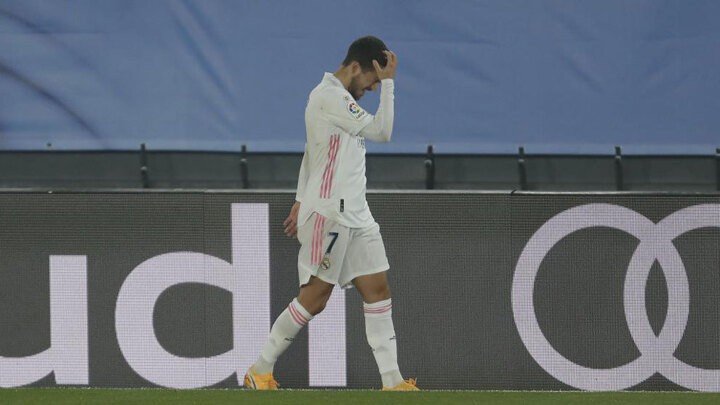 Kris van Crombrugge knows Eden Hazard better than most, given that he has worked with the 29-year-old in his role as a doctor for the Belgian national team.

With the winger now ruled out once again because of his seventh injury since joining Real Madrid, Dr. Van Crombrugge has had his say on the constant injuries and has explained that stress could be playing a role.

"[Hazard] often says that he wants to do all he can for his fans and for his coaches," the doctor told Belgian publication Het Laatste Nieuws. "He always wants to be available to play, so he puts some pressure on himself.

"You can't see this externally, but Hazard is just one person and a good person.

"He wants to get the most out of his body, but he's over the limit right now and too much is being asked of his body in terms of offering superior performance.

"Real Madrid had big expectations for him. He approaches things in a cheerful and natural way, but everyone is subject to a certain level of stress.

"Mental stress can be translated to muscles. I believe his muscle tension is a little bit too high right now, which makes Hazard a player who is more prone to suffering injuries right now."

For the Belgian doctor, this latest setback comes at a terrible time because the winger had performed well against Villarreal and against Inter after returning from his case of coronavirus.

"I felt like we were seeing the old Eden Hazard again," the doctor said.

"That player who can make everyone happy when he is in form, someone who is a delight to watch.

"But the images from the weekend were once again something sad."

Hazard will miss several important fixtures over the coming weeks, after already having been out for 37 games since his arrival at the club. At Chelsea, he missed just 20 matches due to injury over seven years. triste ".