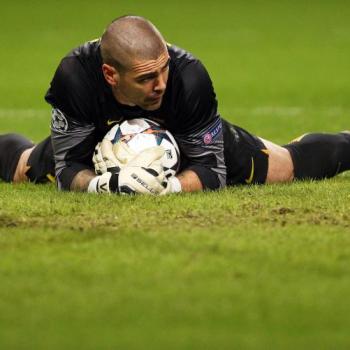 Victor Valdés stole the headlines for all the wrong reasons during the game between Anderlecht and Standard Liege when he grabbed Kara Mbodji by the throat during a clash inside the six-yard box.

The Spanish keeper complained that he had been elbowed previously by the Senegal midfielder during a corner kick and a war of words quickly escalated as the two players began pushing and shoving each other.

Their teammates pulled them apart and it all ended there. In fact, at the final whistle, the keeper was involved in much more light-hearted scenes with Anderlecht striker, Okaka.

Valdés began to justify his behaviour to the Italian, but he was stopped mid-sentence. Okaka did not want an explanation, just the keeper's shirt. The two players laughed at the misunderstanding and calmed things down after the game ended 3-3.