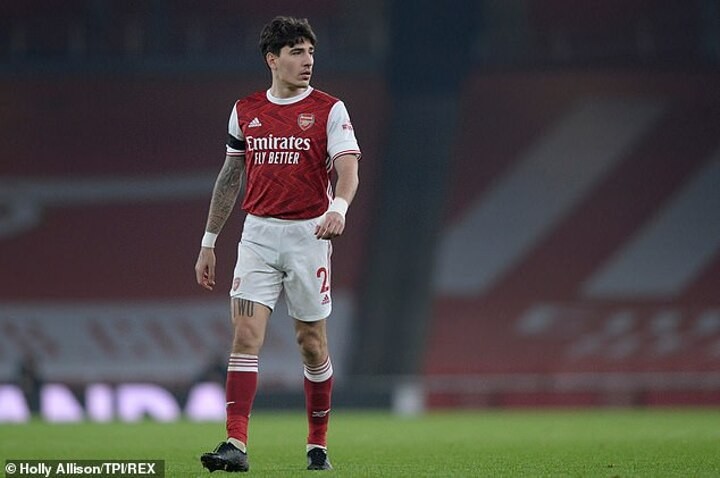 Hector Bellerin has leapt to the defence of underfire Arsenal manager Mikel Arteta by insisting talks of his future are 'unjust' and that the team have improved during his tenure.

Arteta has been in charge at the Emirates Stadium for nearly a year, yet the Gunners have suffered a terrible start to the season, having endured their worst opening 10-game run in Premier League history that leaves them 14th with just 13 points.

Many supporters have grown frustrated with a side that has scored the fewest goals of any team outside the bottom three with 10. However, Bellerin claims talks over Arteta's future are not warranted and that he and his team-mates should instead be taking more of the blame for poor results.

'So unjust. So unjust. As I say, we have to, as players, take responsibility for this because I think we all know that Mikel and his coaching team give us all the tools that we need to win all the games,' he told beIN Sports.

'When you lose a game it's always very easy to blame the coach. But also when the coach gives us the tools we have to be the ones to step up.'

'The way that Mikel plans these games.. all the knowledge that they give us before we step on to the pitch is second to none. Sometimes it's not that easy, depending on the opponent, but that's why football is beautiful. If you play the games on the [tactics] board, then it will be a completely different game.'

Despite his late-year wobble, Arteta has already brought relative success to the Emirates Stadium with has two Wembley wins under his belt following victories in the FA Cup final and the Community Shield.

Right-back Bellerin believes players are still adapting to Arteta's ideas and methods and that everyone involved with the club should be patient in allowing them to develop.

'I think how he [Arteta] changed the dynamic of the team and the club straight away – he was amazing to get two trophies straight away,' he added. 'There are obviously questions, and we're not on the best run.

'I have to say that when you are planning on doing something big – and that's what he's doing, changing the identity of the team, of the club, change the behaviours – he's not trying to make changes just on the pitch but outside of it, this isn't something you can do overnight.'

'I feel the team has improved massively in so many areas of the game that needed improvement. Even though we're not doing so great in others, it's all part of the process'

'When you're trying to implement such a big idea it does take time for everyone to get used to it and it takes time to get results but one thing that I feel is that since he came he has instilled a confidence in this team, a hunger. For us that's so important'

Arsenal will be hoping Sunday's north London derby away at league leaders Tottenham Hotspur provides an ideal opportunity to get back to winning ways.

The 25-year-old claimed the fixture is not one that the Gunners side will need motivating for.