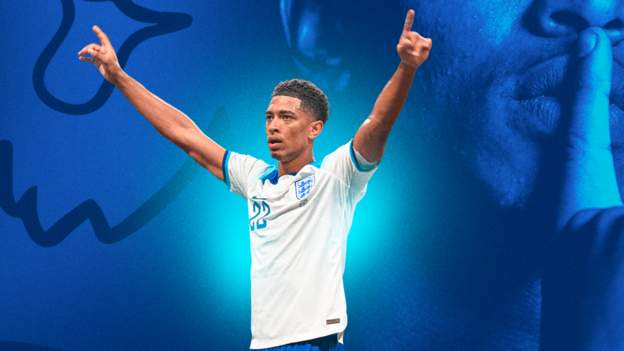 "I don't want to big him up too much because he is still young, but he's one of the most gifted players I have ever seen," Foden told ITV.

"He has no weakness in his game. I think he will be the best midfielder in the world."

High praise indeed and echoed from all corners after England set up a World Cup quarter-final against France with an impressive 3-0 victory over the African champions on Sunday night at Al Bayt Stadium.

There, the 19-year-old Bellingham demonstrated precisely why he has become one of the most sought-after talents in European football.

The stats certainly backed up the noise around his outstanding contribution as the Three Lions reached the last eight at consecutive World Cup tournaments for the first time since 2006.

He did, after all, become the first teenager to assist in a World Cup knockout stage game since 1966 as he set up Jordan Henderson's opener.

Henderson could also not speak highly enough of Bellingham. "I can't keep saying nice things about him because we're talking about a one-off," he told BBC Sport.

"He's only young and we just need to let him play football, but he is incredible."

Aged 19 years and 158 days, he is also the youngest player to assist in any World Cup game for England - also since at least 1966.

Bellingham led the way on a host of metrics in a commanding first-half midfield display, including the most duels won (eight), tackles won (three), possession won in the final third (two) and fouls won for his side (two).

The assured Borussia Dortmund midfielder also had a 100% passing accuracy in the final third (six/six passes) and an overall pass completion of 96% (23/24 passes) - the best figures on the pitch respectively.

That includes the assist for England's first goal and the pass to Foden leading to the Manchester City forward teeing up Harry Kane to make it 2-0.

Jude Bellingham's first-half display featured 23 successful passes (green), including one assist (yellow), while he made just one misplaced pass (red)

Speaking at half-time, former England defender Micah Richards told BBC Radio 5 Live: "He's 19 years of age. To put in a performance like that is just incredible.

"When the game was flat and Senegal were causing England real problems, just when they needed someone to grab the game by the scruff of the neck, Bellingham was there, whether it was defending, attacking, passing.

"I like how aggressive he was, up against a strong and fast Senegalese team. What a performance it was.

"His decision-making as well. He's got that part of his game already at such a young age. It's breathtaking."

Fellow ex-Three Lions player Matt Upson added: "Jude Bellingham, I don't know what he's having for breakfast but he is just everywhere. He's just bouncing around all over the pitch."

Meanwhile, former Manchester United captain Roy Keane added on ITV: "It is exactly what you need from a midfielder when the game is a bit tight - running from midfield. Brilliant."

When a meeting with France on Saturday was all but secured, Bellingham was substituted with 15 minutes remaining, having made the most dribbles (four), and won the most duels (nine) and tackles (four) among a host of match-leading actions.

The former Birmingham City player had an integral role in helping England achieve a third successive clean sheet - their joint-best run in a World Cup since 1982 - while their 12 goals in four matches in Qatar is their joint-most at a single major tournament, level with the 2018 World Cup.

Captain Harry Kane said: "Jude is a fantastic player, he does everything well. I like him a lot, he's a good person, mature for his age and has great leadership skills."

Equally impressed, Gareth Southgate added: "I don't think we could have predicted how quickly Bellingham could mature. In the last five months that has gone to another level.

"We wanted to invest in young players because we felt they could be special in the future. You suffer with that at times because they are not going to be perfect but further down the line you get these performances."

'Birmingham were right to retire his shirt' - your views

BBC Sport readers voted Bellingham their player of the match with a final rating of 8.53. Here's what you were saying about his performance during Sunday's live text coverage...

Josh: Tonight is the Bellingham show! He may not be in the scoresheet but he is bossing this game!

Said: England without Bellingham would be less than average... he is a playmaker.

Chris: Turns out the solution to the Lampard-Gerrard problem is Jude Bellingham.

Andrew: Maybe Birmingham City Football Club were onto something when they retired Jude Bellingham's number 22 shirt when he left for Borussia Dortmund at 17 years old…