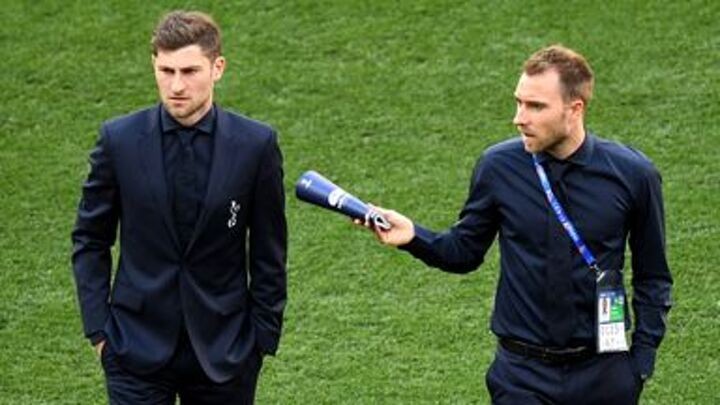 Eriksen, who was resuscitated on the pitch against Finland in Denmark's Euro 2020 opener on June 12, was discharged from hospital on Friday after a successful operation to fit a defibrillator implant.

In his absence, and despite losing their opening group games to Finland and Belgium, Denmark remarkably rallied to qualify for the last 16 with an emotional 4-1 win over Russia on Monday night.

The win booked a meeting with Wales on Saturday, and Welsh defender Davies was full of admiration for the way Denmark battled back after the shock of Eriksen's collapse.

"First of all, they deserve a lot of credit for the way they've handled everything since what happened to Christian. To come back and stand up the way they have has been top," Davies told Sky Sports News.

Davies joined Tottenham in 2014, a year after Eriksen signed, and the pair played together there until the Dane left for Inter in 2020.

On his conversation with Eriksen, Davies added: "It was pretty horrific when it was happening, to not know what was going to happen and how his family was going to be, but I've spoken to Christian since and he seems to be in good spirits.

"The Danish team have really rallied around him. The support he's had in the football world has been incredible, but now is time to give him his privacy, let him recover and hopefully we get to see him back playing football some time soon.

"I'm good friends with Christian. I speak to him regularly, I saw him in Milan last year. He's recovering at home with his family and he's getting better hopefully."

On Monday, Wales' health minister Eluned Morgan said travel restrictions led police in Amsterdam to state they would not be "letting Welsh fans into the country".

Wales play Denmark in the Dutch capital on Saturday, and having already travelled to Baku and Rome, Davies said it will give the team added motivation to reach the quarter-finals.

Davies said: "It's obviously very disappointing we can't have fans there, especially when you see some stadiums pretty full. We've drawn a short straw there, but we've had it already the last few games. We feel like we're properly up against it but we've got to thrive off it.

"You know the support is there, you know they're cheering us on back home. We've got to keep going one step further to try and get them out to support us somewhere."

Wales qualified from Group A as runners-up behind Italy, picking up four points with a draw against Switzerland and victory over Turkey.

Davies said the feeling is similar to that around their Euro 2016 run to the semis, and talked up their achievement of reaching the knockouts this time around after few had backed Wales to qualify.

"It's kind of similar to last time," Davies added. "It hasn't quite sunk in, the achievement we've done again. Getting out of that group, to be honest I don't think too many people gave us hope, but to finish second in it is a really good effort.