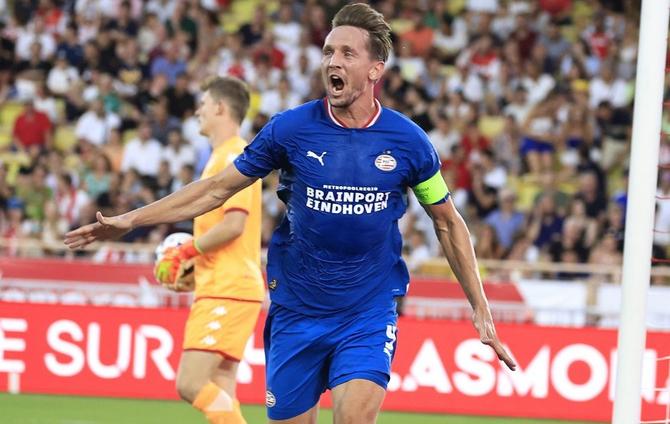 Luuk De Jong claimed an 109th-minute winner as PSV Eindhoven edged Monaco 3-2 in extra-time in the Netherlands, to go through 4-3 on aggregate.

De Jong was adamant his side deserved the win.

"Monaco hit the bar and the post, I hit the target," said the PSV captain.

Monaco had been awakened overnight when fireworks were set off outside their hotel, and there was a fiery atmosphere inside a packed stadium in a see-saw match.

Joey Veerman fired the Dutch ahead on 21mins with a sweet shot into the far corner but Guillermo Maripan then levelled clinically with a cool finish in a goalmouth scramble.

Monaco striker Wissam Ben Yedder then raced on to a sweeping through ball to smack home the go-ahead goal before PSV grabbed a late equaliser as Mexican Erick Gutierrez delivered PSV on 89 minutes.

Benfica beat  Mitjylland 3-1 to win 7-2 on aggregate thanks largely to midfielder Enzo Fernandez and 20-year-old striker Henrique Araujo who scored before Pione Sisto responded for the Danes.

Argentinian Fernandez, 21, and Araujo were making just their second European appearances as Diogo Goncalves claimed the third goal for the 1961 and 1962 winners.

In Scotland Malik Tillman completed a turn around when he scored the decider with 11 minutes left as Rangers beat Union Saint-Gilloise 3-0.

The Belgian outfit had won the first leg 2-0 in their first appearance in European competition since 1964-65.

Dynamo were second in the Ukrainian Premier League when Russia invaded the country earlier this year.

Earlier, Moldovans Sheriff Tiraspol, who stunned Real Madrid at the Santiago Bernabeu during last season's group stages, were knocked out by Viktoria Plzen as the Czech outfit won 4-2 over two legs.

The first leg of the play-offs take place on August 16/17 with the return fixtures a week later.