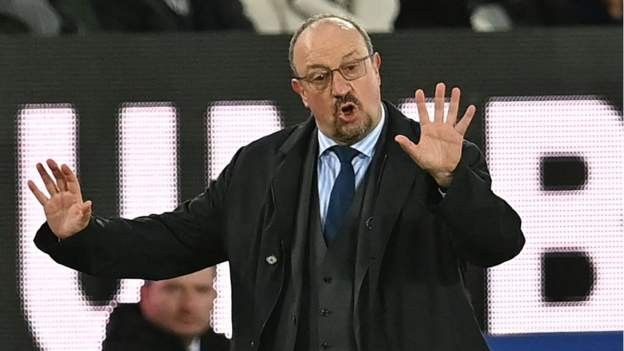 Rafael Benitez says he can help guide Everton in the right direction after admitting Marcel Brands' departure has given him more control.

The Spaniard oversaw a welcome 2-1 win against Arsenal, which ended a run of eight games without a win.

Brands said his exit as director of football came after a "clear difference in the vision" of the club.

Asked if it would give Benitez more control on transfers, the Everton boss said: "You can say it in this way."

He added: "I was working for years with a director of football. It is not an issue. Now we have to think about the future and we have a situation where we must take responsibility.

"The club has changed managers in the past and now they want to do something long term with a clear idea of what we want to achieve. With my experience and the people we have in the club I think we can guide things in the direction that will hopefully be the right one."

Asked further about Brands' departure, Benitez added: "The reality is that the club was not progressing at the pace that maybe everybody was expecting and now it's just really important to be positive about the future."

The win, which lifted Everton to 12th in the Premier League, came after dozens of fans left their seats in the 27th minute to protest about the direction of the club under majority shareholder Farhad Moshiri.

It is approaching 27 years since Everton last won a trophy - the FA Cup in 1995 - with Moshiri spending close to £500m in the six years since he took over the club.

Goals from Richarlison, who also had two other efforts ruled out for offside, and Demarai Gray's injury-time winner, came after Martin Odegaard opened the scoring for Arsenal.

But the much-needed result came without Lucas Digne, who was not in the squad and replaced at left-back by Ben Godfrey, while centre-back Yerry Mina went off with an injury on his first start since 2 October.

Benitez said the Colombian suffered a calf injury after 30 minutes rather than the hamstring problem which had kept him out for two months.

On Digne's absence, Benitez added: "Sometimes you have to make a decision with your team selection. I decided Ben Godfrey was a good option for this game and I was really pleased with his performance.

"The main thing is to make sure the team is performing and has the right mentality."

'The club's a joke right now'

Former Liverpool defender Jamie Carragher speaking to Sky Sports before the match: "The decisions being made by Moshiri are really poor - he hasn't got a clue what he's doing. The club's a joke right now.

"Because they couldn't break that ceiling, you look at how many managers he's had and how much has been spent. He's had eight including interim ones and he's now onto his third director of football.

"The money spent is mind-boggling and they're actually getting worse. In that time under Moshiri, they've signed 58 players.

"That's the big problem. He doesn't have a clue what he's doing. hence eight managers, players getting signed left, right and centre. Yes, he's got the money, but he's got no footballing expertise at all."