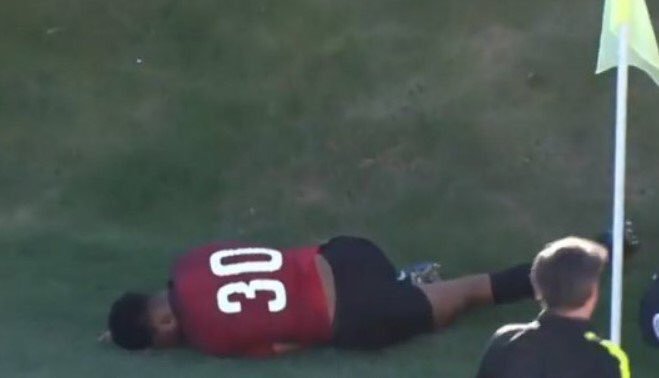 Samuel Tetteh suffered the injury during the match on Monday
Share

Ghana striker Benjamin Tetteh's move to Turkish giants Galatasaray is on the verge of collapse after the in-demand player suffered injury in a friendly match.

The talented attacker was on the brink of finalising the £6.6m move from his club Sparta Prague after Czech side started talks with Istanbul-based club.

However, the move looks to have hit a snag after Tetteh suffered injury while playing in their friendly against MOL Vidi on Monday night.

He was taken off in the 31st minute of the game after setting up the first goal in their match against MOL Vidi.

The Ghanaian did not return to the pitch after his substitution, sparking fears of a serious injury.

The extent of injury is not known but he is to stay on the sidelines for long the move to Galatasaray will be cancelled.

Tests will be carried out on Tetteh on Wednesday to determine the extent of injury and serious injury will also prove a blow to some English clubs who are keen on the Ghanaian.

Everton and Wolves were reportedly linked with a move for Benjamin Tetteh in the January transfer window.

Wolverhampton Wanderers are keen on the striker dubbed as the ‘new Didier Drogba’.

He has scored an impressive nine goals for Sparta, and Wolves held talks over a potential £11 million deal.

However, it seems like both Everton and Wolves are on the verge of missing out on the Ghana U20 international.