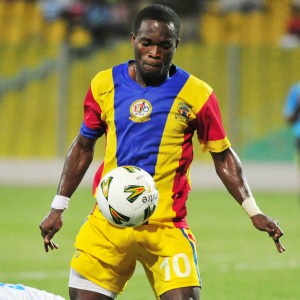 Berekum Chelsea put up sterling performance to earn a deserving 0-0 draw against Hearts of Oak at the Accra Sports Stadium on Sunday night.Â

Hearts were wasteful upfront and should have gone ahead in the first half but striker Mahatma Otoo muffed up several scoring chances.

Uriah Asante also came close after 19 minutes when he burrowed the Chelsea backline and lobbed the ball but goalkeeper Sowah was quick to save it.

Otoo was put through inside the box but the All Africa Games medalist lost his balance and blasted wide.

Chelsea nearly snatched the opener in extra-time of the first half but Clottey's header to Awako's cross narrowly missed the target.

Captain Basit made an in incursion into the Hearts box but he was perfectly tackled by centre-back Agyare.

Otoo could not direct a header and his attempt to play an overhead kick went wide.

Chelsea were denied a scoring opportunity when Solomon Asante began a counter and laid a pass to Clottey but the assistant referee surprisingly flagged offside.

This infuriated head coach Steve Pollack who went on to attack the assistant referee.

Hearts are joint leaders on the league sheet with seven point but lie in second place behind rivals Kotoko due to inferior goal difference.